Course on Islam for Junior Students

This booklet contains educational material for junior learners of Islam in a question-answer format. 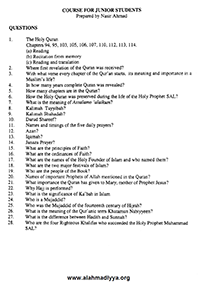 Q. 02: Where was the first revelation of the Holy Quran received?

Q. 03: With what verse does every chapter of the Holy Quran begin and what is its meaning and importance in a Muslim’s life?

Q. 04: In how many years was the entire Holy Quran revealed?

Q. 05: How many chapters are in the Holy Quran?

Q. 06: How was the Holy Quran preserved during the life of the Holy Prophet (pbuh)?

Q. 07: What is the meaning of Assalamo alaikum?

Q. 11: What are the names and times of the five daily prayers?

Q. 15: What are the principles of Faith?

Q. 16: What are the ordinances of Faith?

Q. 17: What are the names of the Holy Founder of Islam and who gave him the names?

Q. 18: What are the two major festivals of Islam?

Q. 20: What are the names of the prominent Prophets of Allah mentioned in the Holy Quran?

Q. 21: What importance has the Holy Quran given to Mary, mother of Prophet Jesus?

Q. 23: What is the significance of the Kabah in Islam?

Q. 25: Who was the Mujaddid of the fourteenth century of Hijrah?

Q. 26: What is the meaning of the Quranic term Khatamun Nabiyyeen?

Q. 27: What is the difference between Hadith and Sunnah?

Q. 28: Who are the four Righteous Khalifas who succeeded the Holy Prophet Muhammad (pbuh)?

“In the name of Allah, the Beneficent, the Merciful.”

A Muslim recites this verse before eating, leaving home, driving a car, wearing new clothes; in fact, before beginning to do anything, in order to seek Allah’s blessings.

A. 06: Whenever a revelation from Allah came down to the Holy Prophet Muhammad (pbuh) through Angel Gabriel, the Prophet used to call a scribe to write it down on anything available such as paper, skin or pieces of wood. These revelations were immediately memorised by many of the Prophet’s companions in the same order as instructed by the Prophet. Thus, the Holy Quran was preserved in writing as well as in the memories of the companions during the lifetime of the Holy Prophet (pbuh).

A. 17: The Holy Prophet of Islam had two names: Ahmad and Muhammad. He was named Ahmad by his mother, Aminah, and Muhammad by his grandfather, Hazrat Abdul Muttalib, who was a well-known chief of the tribe of the Quraish.

A. 18: There are two major festivals in Islam: Eid al-Fitr [Eid-ul-Fitr] and Eid al-Azha [Eid-ul-Adha].Eid al-Fitr is celebrated at the conclusion of a month-long spiritual exercise of fasting in the month of Ramadan. Eid al-Azha is celebrated on the 10th of the month of Zil-Hijj in commemoration of the sacrifice of the elder son of Hazrat Abraham [AS], Hazrat Ishmael [AS], near the Kabah in the city of Makkah, which is now in Saudi Arabia.

A. 21: The Holy Book of Islam, the Quran, not only records Allah’s revelations to Mary [AS], mother of Prophet Jesus [AS], but it also clears her of the allegations levelled against her by the Jews. A whole chapter of the Holy Quran (chapter 19) has also been named after her.

A. 22: The Kabah is the first house of worship appointed by Allah for mankind as is mentioned in the Holy Quran itself. Muslims turn their faces towards it while praying. It signifies and symbolises the unity of Allah which was preached by all the Prophets of Allah and which was finally perfected in theory and practice by the Holy Prophet Muhammad (pbuh).

A. 23: Hajj is performed at the Kabah in commemoration of the unique worship and supreme sacrifice made by Prophet Abraham [AS] and his wife, Hagar [AS], of his son, Hazrat Ishmael [AS], near the Kabah.

A. 24: A Mujaddid, according to an authentic hadith of the Holy Prophet Muhammad (pbuh), is a person who is raised at the head of each century Hijrah to revive the forgotten teachings and practice of Islam.

A. 25: Hazrat Mirza Ghulam Ahmad of Qadian was the Mujaddid of the 14th century Hijrah.

A. 26: It means the Holy Prophet Muhammad (pbuh) is the Last of the Prophets and no Prophet, new or old, shall appear after him. The Holy Prophet (pbuh) has demonstrated perfectly all the excellences and objectives of prophethood, and it was through him that a complete guidance and code of life was revealed in the form of the Holy Quran.

A. 27: The Hadith is the sayings or narrations of what the Holy Prophet (pbuh) did or said in his lifetime. It was collected and compiled by eminent scholars almost one hundred and fifty years after the Prophet’s death. The Sunnah is a record of the practice of the Holy Prophet (pbuh) which has been followed continuously by his followers down to the present time.