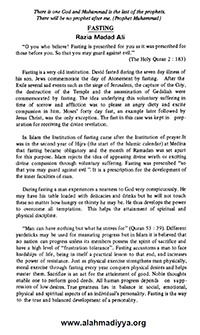 Fasting is a very old institution. David fasted during the seven-day illness of his son. Jews commemorate the day of Atonement by fasting. After the Exile several sad events such as the siege of Jerusalem, the capture of the City, the destruction of the Temple and the assassination of Gedaliah were commemorated by fasting. The idea underlying this voluntary suffering in time of sorrow and affliction was to please an angry deity and excite compassion in him. Moses’ forty-day fast, an example later followed by Jesus Christ, was the only exception. The fast in this case was kept in preparation for receiving the divine revelation.

In Islam the institution of fasting came after the institution of prayer. It was in the second year of Hijra (the start of the Islamic calendar) at Medina that fasting became obligatory and the month of Ramadan was set apart for this purpose. Islam rejects the idea of appeasing divine wrath or exciting divine compassion through voluntary suffering. Fasting was prescribed

“so that you may guard against evil”.

It is a prescription for the development of the inner faculties of man.

During fasting a man experiences a nearness to God very conspicuously. He may have his table loaded with delicacies and drinks but he will not touch these no matter how hungry or thirsty he may be. He thus develops the power to overcome all temptation. This helps the attainment of spiritual and physical discipline.

Different yardsticks may be used for measuring progress but in Islam it is believed that no nation can progress unless its members possess the spirit of sacrifice and have a high level of “frustration tolerance”. Fasting accustoms a man to face hardships of life, being in itself a practical lesson to that end, and increases the power of resistance. Just as physical exercise strengthens man physically, moral exercise through fasting every year conquers physical desires and helps master them. Sacrifice is an act for the attainment of good. Noble thoughts enable one to perform good deeds. All human progress depends on suppression of low desires. True greatness lies in balance in social, emotional, physical and spiritual aspects of an individual’s personality. Fasting is the way to the true and balanced development of a personality.

Nobody can belittle the significance of food and sex for human life but if left unharnessed these forces lead to the destruction of the social order. When, however, disciplined these forces prove to be man’s best friends. Through fasting Islam seeks to channel man’s energies into ways leading to spiritual greatness. Regular fasting for a month every year is a spiritual, moral and physical discipline of the highest order.

According to the social psychologists group activity and mass communication are a must for the development of altruistic behaviour. Observation of fasting and five prayers a day in congregation in the mosque provide frequent opportunities of mass communication. You see the rich and the poor changing their feeding schedules according to the divine law. The rich who eat and drink six times a day can never have any knowledge of the hunger experienced by the hungry. Fasting enables them to identify with the hungry and excites in them compassion for the poor.

“Allah desires ease for you and He desires not hardship for you” (The Holy Quran, 2:185).

The sick, the traveller, old people, young children, pregnant women, those breastfeeding and women in menstruation may not fast. However, after convalescence, delivery and at the end of menstruation the number of days missed should be made up. Therefore, there is no absolute exemption from this moral exercise. Of course, the bedridden and those on constant travelling duty are exempt. However, to effect redemption they must feed a poor man for each day missed.

Islam has no mere dogmas, no belief forced upon man for his alleged salvation. According to Islam belief is not only conviction of the truth of a given proposition, but it is essentially the acceptance of a proposition as a basis for action. Every article of faith means a principle to be carried into practice for the higher development of physical, social, intellectual, spiritual and moral faculties of man.

DID YOU KNOW THAT: