Summary
Download PDF
Summary
This booklet contains the text of a Friday sermon delivered by Dr. Saeed Ahmad Khan (the then, Vice President, and later the 3rd Ameer of Ahmadiyya Anjuman Ishaat-e-Islam Lahore) on 22nd August 1975 at the 7th Ahmadiyya Convention held in London between the 21st and 29th of August 1975. It highlights the paramount importance of attending the Friday sermon and prayer; and, the role of the Ahmadiyya Movement in propagating the message of Islam.
Download PDF 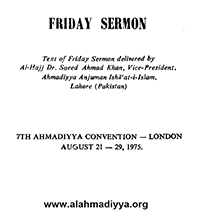 “In the name of Allah, the Beneficent, the Merciful.

He it is Who raised among the illiterates a Messenger from among themselves, who recites to them His messages and purifies them, and teaches them the Book and the Wisdom although they were before certainly in manifest error—

And others from among them who have not yet joined them. And He is the Mighty the Wise (The Holy Quran, 62:1–3).”

The verses I have recited are the opening verses of the chapter of the Holy Quran entitled Al-Jumuah or The Congregation. They give the rationale of the Muslim institution of the Friday prayer, of which the distinguishing and most important feature is the sermon; therefore, those who miss the sermon miss the real benefit of the Friday congregation. If the mere saying of the prayer (shortened for the sake of the sermon) had been enough, Islam would not have attached so much importance to this congregation. Section 2 of this chapter is devoted to the exhortation to the Muslims to hasten to the remembrance of Allah as soon as the first call to Friday prayer is sounded and to give up all other pre-occupations, including the most pressing business transactions which cannot brook delay, in order to give precedence to the moral and spiritual profit gained from the Friday sermon.

The correct course, therefore, is to come well before the sermon, initiated by the second call to prayer, and to say the preliminary two rakats [cycles] of prayer before the sermon begins. The Holy Prophet [Muhammad], peace and blessings of Allah be upon him, in order to emphasise the sanctity of the sermon, prohibited the asking of questions during the sermon, and said that those who miss the sermon have not performed the Friday prayer, but they should say the ordinary Zuhr (midday) prayer instead.

Now, what is the rationale of the Friday sermon? The preceding chapter of the Holy Quran, Al-Saff [Chapter 61], speaks of the ultimate predominance of Islam over other religions and the importance of its message being passed on to those not fortunate enough to be born a Muslim. If they remain in darkness and error, and fail to achieve the moral and spiritual progress destined for man, the fault and blame would rest with the born Muslims.

But those who carry the message of Islam to others should themselves be true Muslims, that is, be free from all moral and spiritual diseases, defects or weaknesses. And even the average Muslims should be true Muslims, in word and deed, or else the non-Muslims would form a very bad impression about Islam from their bad example. Hence the verses I have recited speak of the great purification which can be brought about through the Holy Quran being read and explained to the Muslims, especially during the Friday sermon.

draws attention to the universe as evidence of certain attributes of its Great Creator. What was uttered through the tongue of a prophet who could neither read nor write and had no access to any outward source of knowledge, nearly 1400 years ago, has now been proved by scientific discoveries, namely, that the whole universe is one and has therefore been created by one Creator, that the whole universe follows uniform laws proving not only the Unity of God but also the fact that He is the King, the real Ruler of the universe, and that man is only His vicegerent on this small planet, as stated in another place in the Holy Quran.

God has been described as the King of the universe—not the modern constitutional and nominal head, but the Mighty, that is, an absolute ruler Who is All-Powerful. Now, we human beings, prone to human weaknesses and the promptings of the devil, have found that power corrupts and absolute power corrupts absolutely, unless the ruler is a person free from weaknesses and defects. That is why the word Holy has been used in this verse to make it clear that God is free from all weaknesses and defects. This is proved by the present scientific discoveries that the universe, from its unimaginable vastness to its smallest atom, and the whole world now discovered within that atom, are perfect, that is, free from all defects. Their absolute perfection alone has made scientific discoveries possible. And lastly, the verse I have recited speaks of God being Wise, which means that He uses His unlimited powers and control, not arbitrarily, not whimsically, but with great wisdom. And that again is proved by the wisdom and knowledge revealed by present-day Science.

Now the Holy Quran says that the whole universe has been created to serve Man. To quote only one verse:

i.e., by His delegation of authority.

Since the whole universe is made perfect and free from defect, could God’s best creation and vicegerent on earth have not been intended to be similarly perfect and free from defect? It is well-known that man has been created in God’s image. For the same reason man, out of the whole creation, enjoys freedom of will. Unfortunately, he does not usually exercise that freedom properly. And he is apt to go astray.

To guide him to the straight path, God sent from time to time prophets with revealed Books containing Divine Guidance. Although they all contained basically the same truth, they were unfortunately lost or corrupted. This was facilitated by the fact that those books were not reduced to writing at all or it was done centuries later. And the loss or corruption of those teachings led to the present-day differences in religion, the hostility between religions, even to religious wars.

So God in His Infinite Wisdom decided to unite mankind under one Prophet [Muhammad (pbuh)], on one Book [Quran] which was reduced to writing as soon as it was revealed. And He made that Prophet the last Prophet so that the unity of mankind should not be broken. And the Book God sent down finally was naturally the complete Guide. The Holy Quran alone of all the revealed books contains God’s Own announcement that,

“This day have I perfected for you your religion and completed My favour to you and chosen for you Islam as a religion” [The Holy Quran, 5:3].

And to show the sublimity of this Book, and the great spiritual powers of the Holy Prophet [Muhammad], peace and blessings of Allah be upon him, the nation chosen for purification and perfection was the most degenerate and degraded people in human history. All vices one could think of were found in their worst form among them. What is more, they were proud of what they did. They were also proud of their ignorance and illiteracy. In such a society, a Prophet, peace and blessings of Allah be upon him, was raised who was illiterate himself, so that he could not get any knowledge himself, and the society around him was also sunk deep in ignorance and debasement.

Education enlightens the mind and prepares it for receiving further light, including spiritual light. An educated person is already civilised more or less. It is not difficult to teach him morals and good behaviour that he may be lacking. But to take an illiterate nation which is sunk to the lowest depths of human degradation and to transform it within a short period of two decades is the biggest miracle of history.

To those not fully aware of the impossibility of such a task, I would suggest that they try to reform those near and dear to them such as their wives, children, relatives or friends. It is a most difficult and heart-breaking task to cure even one human being, of even one vice or defect, even if that person is under one’s influence and control. To reform a whole nation, which was aggressively hostile to the Holy Prophet, peace and blessings of Allah be upon him, within a short span of two decades from the lowest levels of human degradation to the highest levels of human conduct was indeed a unique miracle, a unique tribute to the effectiveness of the Holy Quran and to the great spiritual powers of the Holy Prophet, peace and blessings of Allah be upon him. And he performed this miracle not only by his own example but with the help of the Holy Quran.

This is stated in the verse I have recited,

“He (Allah) it is Who raised among the illiterates a Messenger from among themselves, who recites to them His Messages and purifies them, and teaches them the Book and the Wisdom—although they were in manifest error” [The Holy Quran, 62:2].

The sublimity of the Holy Quran and the purifying influence of God’s Own words are felt even by mere recitation of, or listening to, the Holy Quran. Then its moral teachings, which purify and perfect human character, are couched in the plainest possible language. So that if one reads this Book and acts accordingly, that is enough for human purification and perfection.

But the Friday sermon is meant to go further. Through it the Holy Prophet, peace and blessings of Allah be upon him, taught his followers the knowledge of things spiritual, social and moral. Through it can the knowledge of God be acquired, which helps man to attain God and thus attain the goal of his creation.

The last verse I have recited speaks of:

“and others from among them who have not yet joined them” [The Holy Quran, 62:3].

The Holy Prophet, peace and blessings of Allah be upon him, himself was asked who they were. He put his hand on the shoulder of Salman [rta] the Persian and said,

Muslim history shows that that man was the Promised Messiah, Hazrat Mirza Ghulam Ahmad [of Qadian]. That he also, with the help of the spiritual powers of the Holy Prophet [Muhammad], peace and blessings of Allah be upon him, acting through him, purified and perfected an almost spiritually dead people is known to all of us who had the good fortune to see them. But this was testified to even by those who were not his followers. To quote the famous poet, philosopher and thinker of the East, Dr. Sir Muhammad Iqbal:

“If you wish to see a true and faithful example of Islamic character, go to Qadian” (which was then the home of the followers of the Promised Messiah).

The verses I have recited end with the words that Allah is “Mighty and Wise”. There is a clear hint there that the true followers of the Promised Messiah, whose number is greatly reduced by the defection of those who followed Mirza Mahmud Ahmad and are now based at Rabwah, Pakistan, with the remaining true followers based at Lahore, Pakistan, will be small in number and weak. But they will have the backing of Allah, Who is Mighty, but uses His Might with Wisdom. In Him, therefore, we repose our trust and to Him we turn in humble prayer.