The Holy Quran and the Bible

Summary
Download PDF
Summary
In this book, Khwaja Kamal-ud-Din explains why the Holy Quran refers to the Jewish scriptures during the course of its teachings.
Download PDF 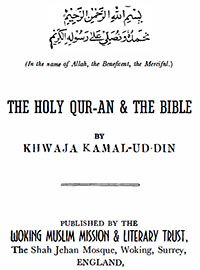 The question has often been asked as to why the Holy Quran refers only to the Jewish scriptures. It is urged that if it was meant as a guidance for the whole world, then it should have also referred to the other revealed books. The answer is very simple and not far to seek. It is furnished by the Holy Quran itself.

The Book is neither a treatise on Ritualism, like the Rigveda – the Hindu Sacred Book, nor a tribal record like the Bible. It deals with ceremonial religion, but its minimises1 its importance, and speaks of it as a means to attain higher ends. It is intended to bring righteousness to the worshipper. It narrates certain historical events, but with a purpose. It refers to the history of the Israelites in its pages. The Jews, in those days, were the only nation in the whole world who possessed a history in black and white. The world had seen many religions and civilisations before Islam, but the authentic writing of history was a thing nearly unknown in pre-Islamic days. Even modern discoveries have failed to find out any recorded history of the ancient people. The Quran, therefore, could not refer to the history of any other nation to serve its purposes, which were as follows:

1. The Book intended to elucidate some of its tenets by referring to certain points. For instance, it sought to convince those around the Holy Prophet in the days of adversity, that his mission would meet with success, just as all Messengers from God had succeeded in the end to the discomfiture of their adversaries. For this reason, the Book repeatedly made reference to Moses and Pharaoh. It also spoke of the success of other prophets2 in the face of opposition. The Book purposely avoids the account of many ordinary things in their life-story as not possessing any practical moral for a reader. The Quran is not a book of stories, but a Book of wisdom and morals.On the other hand, it gives a detailed account of Joseph, but his story has been the subject of infinite moralising. Joseph had his enemies among his brethren; he was betrayed by them and had to face many hardships. But he achieved unique success afterwards, when he saw his brethren at his feet. The arch-enemies of the Arabian Prophet [The Holy Prophet Muhammad (peace and blessings of Allah be upon him)] were also his near relatives. The chapter dealing with Joseph in the Quran was revealed at a time when those enemies were trying their utmost to make an end of the Prophet. Friends and foes then asked him as to what was to be the final outcome of the situation. The Revelation came therefore to declare that there was a reply3 to such inquirers in the story of Joseph. Like the other sons of Jacob, the brethren of the Prophet would one day be also at his mercy. The day came and the Prophet found the enemy in terror of a severe retribution from him for their savage oppression of him and his followers, but he informed them that they would receive the same treatment at his hand that Joseph’s brethren had from their brother.4

2. The Judaic Scripture, though passing as a Revealed Book, has not remained free from errors and inaccuracies. The Bible contained many inaccurate records, and these the Arabian Revelation [The Holy Quran] came to correct. Reference may here be made to one such event, viz., that of the drowning of Pharaoh; similarly, we read that Aaron joined with his people in worshipping the calf in spite of Moses, who made them drink the water in which the ashes of the burnt calf had been mixed. All this is a fiction and the Quran contradicts it.

3. The Bible gives a most unworthy account of the various prophets of God. Many of those who came to walk humbly with the Lord as His Messenger and mouthpiece, have been shown as cutting a despicable figure. But this was all a defamation from the hostile pen of writers who either bore malice against some of the patriarchs, like David and Solomon, or sought to vilify the prophet’s descendants, as in the case of the Moabites. Even a patriarch like Abraham was not spared, who, they say was a liar. The same thing is said about Joseph. Then there is Lot under the influence of wine, as the Bible records, misconducting himself with his own daughters. Noah, instead of giving thanks unto the Lord, got drunk soon after he was delivered from the Flood. David sacrificed his piety at the altar of an unholy passion. Solomon, as depicted in the Bible, seems to be rather an indulgent poet than a prophet. The Judaic Scriptures contain scurrilous libels on the memory of this righteous class, as the Last Book of God [The Holy Quran] said, and the Book came to clear their sacred names from all the calumnies heaped upon them.5

4. The Bible gives a most unscientific account of the creation of the heaven and the earth in the Book of Genesis. Let the Fundamentalist say what he will, but science has confirmed the Quran in this respect.