This booklet gives a synopsis of the history, beliefs and work of the Ahmadiyya Anjuman Ishaat-e-Islam Lahore.

Listen to the Audiobook 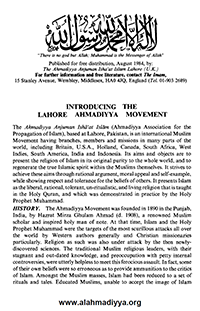 The Ahmadiyya Anjuman Ishaat Islam (Ahmadiyya Association for the Propagation of Islam), based at Lahore, Pakistan, is an international Muslim Movement having branches, members and missions in many parts of the world, including Britain, U.S.A., Holland, Canada, South Africa, West Indies, South America, India and Indonesia. Its aims and objects are to present the religion of Islam in its original purity to the whole world, and to regenerate the true Islamic spirit within the Muslims themselves. It strives to achieve these aims through rational argument, moral appeal and self-example, while showing respect and tolerance for the beliefs of others. It presents Islam as the liberal, rational, tolerant, un-ritualistic, and living religion that is taught in the Holy Quran, and which was demonstrated in practice by the Holy Prophet Muhammad [pbuh].

The Ahmadiyya Movement was founded in 1890 in the Punjab, India, by Hazrat Mirza Ghulam Ahmad (d. 1908), a renowned Muslim scholar and inspired holy man of note. At that time, Islam and the Holy Prophet Muhammad [pbuh] the targets of the most scurrilous attacks all over the world by Western authors generally and Christian missionaries particularly. Religion as such was also under attack by the then newly-discovered sciences. The traditional Muslim religious leaders, with their stagnant and outdated knowledge, and preoccupation with petty internal controversies, were utterly helpless to meet this ferocious assault. In fact, some of their own beliefs were so erroneous as to provide ammunition to the critics of Islam. Amongst the Muslim masses, Islam had been reduced to a set of rituals and tales. Educated Muslims, unable to accept the image of Islam before them, were losing faith fast and even discarding their religion to embrace other creeds.

It was at this time of despair and defeat for the Muslim world that Hazrat Mirza Ghulam Ahmad, through knowledge given to him by God, came forward to defend Islam and to reveal its true, original spirit which had become clouded over the ages. Through his books, lectures and public debates, he not only refuted the mass of charges against Islam, but actually carried the battle right into the camps of its opponents by demonstrating the superiority of Islamic teachings. The Muslims rejoiced at this turnabout, and upon his death he was hailed as “the victorious general of Islam” by prominent contemporary Muslims.

At that time of the worst decline of the Muslims, Hazrat Mirza received intimation from God to disclose that the age of the worldwide, final triumph of Islam, as prophesied in the Holy Quran, had now arrived. But it would be an intellectual, moral and spiritual triumph, in a spirit of love and sympathy for all mankind. Hazrat Mirza also formed a Movement and Community of Muslims, named Ahmadiyya after the Holy Prophet Muhammad’s [pbuh] other well- known name Ahmad, to carry the defence and propagation of Islam to the whole world, and to emphasise the forgotten Islamic values of peace, forgiveness, tolerance, and broad sympathy towards all human beings. Some of the leading Muslim intellectuals and religious scholars of the time joined the Movement.

The Ahmadiyya Anjuman Ishaat Islam of Lahore, established in 1914 by the prominent followers of Hazrat Mirza Ghulam Ahmad, has carried forward the Divine mission of the Founder. Its leaders have been recognised as the greatest Muslim scholars, authors, and missionaries of modern times. The first Head of the Anjuman, the late Maulana Muhammad Ali (d. 1951), wrote numerous English books on all aspects of Islam, which have been acclaimed as making a true picture of Islam available to the West for the first time. The late Khwaja Kamal-ud-Din (d. 1932) was the pioneer Muslim missionary to the West who established the Woking Muslim Mission in England seventy years ago. The Anjuman also set up a mission in Berlin in the mid-1920s. These missions, for long the only centres of Islam in Europe, achieved tremendous success in removing the hostile Western misconceptions about Islam, and even gained thousands of Europeans converts to the faith. Elsewhere in the world too, wherever Islam was under ideological threat, from Fiji and Indonesia to Suriname and Guyana, the Lahore Ahmadiyya Movement sent its missionaries and its literature, and the challenge was soon repulsed. The Anjuman also worked to educate and uplift the local Muslims in these lands.

The beliefs of the Lahore Ahmadiyya Movement are the same as those held by Muslims generally, namely, that the Holy Quran is the word of God to guide mankind forever, and that the Holy Prophet Muhammad [pbuh] was the perfect model of Islamic teachings whose example (Sunna) shall forever be binding on every Muslim to emulate. We believe that, as religious doctrines and practices reached perfection in the teachings of the Holy Quran and the example displayed by the Holy Prophet, so the Quran is the final Divine Scripture and Muhammad (peace be upon him) is the Last Prophet, after whom no prophet is to appear.

Each new age, however, raises fresh challenges, and also with the passage of time the original face of the religion becomes obscured, and faith loses its vitality in people’s hearts. For this reason, God has promised to raise amongst Muslims, from time to time, persons known as Mujaddids (Revivers of religion) whose God-given mission is to:

In the modem age, it was Hazrat Mirza Ghulam Ahmad whom God raised as the Mujaddid to carry out these tasks. For this purpose, he highlighted certain points of the Islamic teachings which had been lost sight of over the centuries. These points hold the key to the defence and propagation of Islam in the world of today, and may be described as the characteristic beliefs of the Lahore Ahmadiyya Movement. These are as below:

In its Islamic propagation work, the Lahore Ahmadiyya Movement proclaims to the Western world that only Islam can provide the spiritual force to balance the modern materialistic progress which is leading mankind to destruction; and only Islam can heal the divisions in humanity. To the Muslims, the Movement teaches that their progress lies in returning to the Islam of the Holy Quran and Holy Prophet Muhammad [pbuh], which is very different from the much-publicised “fundamentalist” Islam of today.

This work is carried out through the publication and distribution of suitable literature, and the establishment of missionary centres. The Anjuman has a vast stock of high-quality literature in many languages covering all aspects of Islam. Famous works by Maulana Muhammad Ali, such as the English translation of the Holy Quran with commentary, were the pioneer Muslim publications in any European language. These books have brought thousands of non-Muslims into the fold of Islam, millions more closer to it, and restored the faith of untold numbers of Muslims all over the world. Free booklets are also published in many languages on a large scale. At present, translations of the Holy Quran (along with commentary) are being prepared in the Spanish, French and Japanese languages, and a scheme is under way to donate sets of major books to libraries in the Western world.

After its pioneer Muslim missionary centres in Europe and elsewhere, the Lahore Anjuman has recently set up new centres in U.S.A., Holland, Canada and South Africa. The British branch of the Lahore Ahmadiyya Movement operates from a centre in the Wembley area of London. All seekers-after-truth are invited to call, write, or phone for further information. Our Muslim brothers are invited to come and see the work of the Movement, and to join us in the noble tasks of the propagation of Islam and Muslim reform.