In this book, Maulana Muhammad Ali tackles the topical subjectsof Islam’s liberal view of other religions, its faith in all Prophets (peace be upon them), freedom in Religion, the basis of Jihad (Holy War), the bond of friendship with non-Muslims, and the sensitive issue of apostasy. 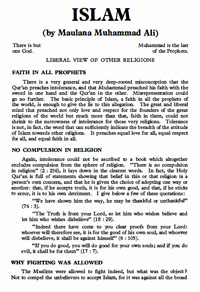 There is but one God.

Muhammad is the last of the Prophets.

Liberal View of other Religions:

Faith in All Prophets:

There is a very general and very deep-rooted misconception that the Quran preaches intolerance, and that Muhammad preached his faith with the sword in one hand and the Quran in the other. Misrepresentation could go no further. The basic principle of Islam, a faith in all the prophets of the world, is enough to give the lie to this allegation. The great and liberal mind that preached not only love and respect for the founders of the great religions of the world but much more than that, faith in them, could not shrink to the narrowness of intolerance for those very religions. Tolerance is not, in fact, the word that can sufficiently indicate the breadth of the attitude of Islam towards other religions. It preaches equal love for all, equal respect for all, and equal faith in all.

No Compulsion in Religion:

Again, intolerance could not be ascribed to a book which altogether excludes compulsion from the sphere of religion. “There is no compulsion in religion” (The Holy Quran, 2:256), it lays down in the clearest words. In fact, the Holy Quran is full of statements showing that belief in this or that religion is a person’s own concern, and that he is given the choice of adopting one way or another: that, if he accepts truth, it is for his own good, and that, if he sticks to error, it is to his own detriment. I give below a few of these quotations:

“Indeed there have come to you clear proofs from your Lord: whoever will therefore see, it is for the good of his own soul, and whoever will disbelieve, it shall be against himself” (6:105).

Why Fighting Was Allowed:

The Muslims were allowed to fight indeed, but what was the object? Not to compel the unbelievers to accept Islam, for it was against all the broad principles in which they had hitherto been brought up. No, it was to establish religious freedom, to stop all religious persecution, to protect the houses of worship of all religions, mosques among them. Here are a few quotations:

“And had there not been Allah’s repelling some people by others, there would have been pulled down cloisters and churches and synagogues and mosques in which God’s name is much remembered” (22:40).

“And fight against them until there is no more persecution, and religion is only for Allah” (2:193).

“And fight against them until there is no more persecution, and all religions should be for Allah” (8:39).

Under what conditions was the permission to fight given to the Muslims? Every student of Islamic history knows that the Holy Prophet and his Com­panions were subjected to the severest persecution, as Islam began to gain ground at Makkah; over a hundred of them fled to Abyssinia, but persecution grew still more relentless. Ultimately, the Muslims had to take refuge in Madinah, but they were not left alone even there, and the sword was taken up by the enemy to annihilate Islam and the Muslims. The Quran bears express testimony to this:

“Permission to fight is given to those upon whom war is made because they are oppressed, and Allah is well able to assist them; those who have been expelled from their homes without a just cause except that they say, Our Lord is Allah” (22:39, 40).

Later, the express condition was laid down:

The Quran, therefore, allowed fighting only to save a persecuted com­munity from powerful oppressors, and hence the condition was laid down that fighting was to be stopped as soon as persecutions ceased:

“But if they desist, then Allah is Forgiving, Merciful. And fight against them until there is no more persecution” (2:192, 193).

If the enemy offered peace, peace was to be accepted, though the enemy’s intention might be only to deceive the Muslims:

“And if they incline to peace, do thou incline to it and trust in Allah; He is the Hearing, the Knowing. And if they intend to deceive thee, then surely Allah is sufficient for thee” (8:61, 62).

The Prophet made treaties of peace with his enemies; one such treaty brought about the famous truce of Hudaibiyah, the terms of which were not only disadvantageous, but also humiliating to the Muslims. According to the terms of this treaty “if an unbeliever, being converted to Islam, went over to the Muslims, he was to be returned, but if a Muslim went over to the unbelievers, he was not to be given back to the Muslims.” This clause of the treaty cuts at the root of all allegations of the use of force by the Holy Prophet.

It also shows the strong conviction of the Holy Prophet that neither would Muslims go back to unbelief, nor would the new converts to Islam be deterred from embracing Islam because the Prophet gave them no shelter. And these expectations proved true, for while not a single Muslim deserted Islam, a large number came over to Islam, and, being refused shelter at Madinah, formed a colony of their own in neutral territory.

Relations of Friendship with Others:

It is sometimes asserted that the Quran forbids relations of friendship with the followers of other religions. How could a Book which allows a man to have as his comrade in life a woman following another religion (5:5), say in the same breadth that no friendly relations can be had with the followers of other religions? The loving relation of husband and wife is the friendliest of all relations and, when this is expressly permitted, there is not the least reason to suppose that other friendly relations are forbidden. The fact is that, wherever there is prohibition against making friends with other people, it relates only to the people who were at war with the Muslims, and this is plainly stated in the Quran:

“Allah forbids you not respecting those who have not made war against you on account of your religion, and have not driven you forth from your homes, that you show them kindness and deal with them justly; for Allah loves the doers of justice. Allah forbids you respecting only those who made war upon you on account of your religion, and drove you forth from your homes and backed up others in your explusion that you should make friends with them, and whoever makes friends with them, these are the unjust” (60:8, 9).

No Punishment for Apostasy:

Another widely prevailing misconception may also be noted here. It is generally thought that the Quran provides a death sentence for those who desert the religion of Islam. Anyone who takes the trouble to read the Quran will see that there is not the least ground for such a supposition. The Quran speaks repeatedly of people going back to unbelief after believing, but never once does it say that they should be killed or punished. I give here a few quotations:

“And whosoever of you turns back from his religion, then he does while an unbeliever — these it is whose deeds go for nothing in this world and the Hereafter” (2:217).

“O you who believe, should one of you turn back from his religion, then Allah will bring a people whom He shall love and they too shall love Him” (5:54).

“Those who disbelieve after their believing, then increase in disbelief, their repentance shall not be accepted, and these are they that go astray” (3:89).

On the other hand, the Quran speaks of a plan of the Jews to adopt Islam first and then desert it, thus creating the impression that Islam was not a religion worth having (3:71). Such a scheme could never have entered their heads while living at Madinah, where the Government was Muslim, if apostasy, according to the Quranic law, were punishable with death. The misconception seems to have arisen from the fact that people who, after becoming apostates, joined the enemy, were treated as enemies, or that, where an apostate took the life of a Muslim, he was put to death, not for changing his religion, but for committing murder.

Some Quotations from the Holy Books:

Did you know that the Bible says,

“Christ has redeemed us from the Curse of the Law, He being made a curse for us, for it is written, He that hangeth is an Accursed of God.” (Gal. 3 v. 13).

Did you know that the Holy Quran says,

Jesus was not killed, nor crucified, but so it was made to appear to the Jews, they did not really kill Him, Nay, God Exalted Him in his presence.

Did you know that Jesus said that

God … shall send a messenger of salvation and his word shall be true insomuch that heaven and earth shall foil, but his faith shall never foil, MUHAMMAD is his blessed name.

Then the crowd lifted up their voices, saying:

O God send us thy messenger, O Muhammed, come quickly for the salvation of the world. (Barnabas XCVII).