The Author — a British convert to Islam — gives a synopsis of the basic summary of Islam and its tenets and practices. 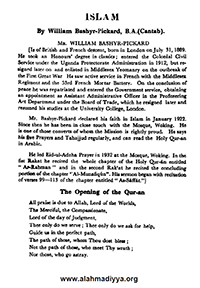 William Burchell Bashyr-Pickard is of British and French descent, born in London on July 31, 1889. He took an Honours’ degree in classics; entered the Colonial Civil Service under the Uganda Protectorate Administration in 1912, but resigned later on and enlisted in Middlesex Yeomanry on the outbreak of the First Great War. He saw active service in French with the Middlesex Regiment and the 53rd French Mortar Battery. On the conclusion of peace he was repatriated and entered the Government service, obtaining an appointment as Assistant Administrative Officer in the Profiteering Act Department under the Board of Trade, which he resigned later and resumed his studies at the University College, London.

Mr. Bashyr-Pickard declared his faith in Islam in January 1922. Since then, he has been in close touch with the Mosque, Woking. He is one of those converts of whom the Mission is rightly proud. He says his five Prayers and Tahajjud regularly, and can read the Holy Quran in Arabic.

The Opening of the Quran:

Allah is the Arabic word meaning “the One Supreme Deity,” “God” beside Whom there is no other divinity. Even in this age, and with means of communication so rapid and so perfected, we find that this fundamental point is not general knowledge to Western minds.

Muhammad incorrectly spelt Mahomet, Mohammad, etc.) was a prophet and a man. He laid no claims whatsoever to divinity. Indeed, he stressed his own humanity. Muslims (widely, but incorrectly, spelt Moslems) are those who have submitted to the Will of God. They lay no claim for divinity on behalf of the Prophet Muhammad. They maintain (as the Prophet himself maintained) that Muhammad was a man. Therefore, they do not offer worship to him. They do not pray to him. Their prayers are directed towards God alone. They even pray on behalf of Muhammad, that the Peace and the Blessing of God may abide with him!

It is often presupposed in the West that Islam was a new religion introduced by the Prophet Muhammad. This also is erroneous. Islam (the religion of submission to the Will of the One Supreme God) was the religion of Adam, of Abraham, of Moses, of the various Prophets of the Old Testament, and also of Jesus (upon each and all of whom be peace!). Muhammad, in his capacity of Prophet, reiterated the divine Truth, and restored the true religion in an age sunk in corruption. Muhammad’s message to mankind, based on Eternal Truth, was

“There is One only God. He hath no partner, nor associate. There is no other person, being or thing worthy of worship. Worship God, and God alone.”

Now let us consider Islam. The subject unfolds itself naturally into two parts, perfectly balanced: theoretical, practical; contemplation of God, contemplation of mankind; individual and universal. Let us, therefore, for the sake of clearness, consider Islam under two distinct headings. Let us take the wonderful simplicity of the formula of the Faith, expressed in the words:

La ilaha ill-Allah, Muhammad-ur-Rasul-Allah (There is no god but God, and Muhammad is the Messenger of God),

and let us consider Islam firstly, in regard to God (Whose Name be praised, the One!), and, secondly, in regard to the Prophet Muhammad (may the Peace and the Blessings of God abide with him!).

La ilaha ill-Allah: There is no god but God. The complexity of manifest life needs a simplicity for understanding. Islam makes life clear to its followers by the revelation of the Beauty of the Divine Unity. God is One. He hath no partner, no sharer, no participator, no equal, no rival: and there is nothing like unto God. The likeness of God cannot be conceived; it does not exist. The Unity of God is the manifestation of the meaning of existence. The beauty and the power and the wisdom of life is one. Unity belongeth unto God (Whose Name be praised!) Behold now, how simple is the path! Our worship is due to One only God, Complete Possessor, Complete in Wisdom, and Complete in Power, the Eternal, the Most Merciful of the merciful ones. Our prayers are due to One only God. Pray not to saints, pray not to prophets, pray not except to the One only God, Lord of the Dominion, of all things and of all beings, the Lord of the Worlds; the Hearer, the Answerer.

Now, it may be asked, what can we (brief suffering mortality) know concerning God? How can we attain nearness to Him? How can we rely upon Him? Knowledge of God may be obtained (by the Permission and Grace of God) by spiritual contemplation and by reflection upon manifest life. Contemplate nature, contemplate the action and the sufferings, and peaceful happiness of human life, and the remembrance of God will make clear some of the Attributes of God: for through the Attributes of God lies the knowledge of God.

Now, of the Attributes of God the most manifest is that of mercy. The ample and abundant and overflowing provision of the wants of humanity testifies to the Divine Mercy to all who have eyes to see and hearts to understand and give thanks (Praise to His name, the Most Merciful of the merciful ones!)

Another of the Divine Attributes of which we cannot remain unmindful, is that of Chastisement. Contemplation of human life and human sufferings makes it inevitably plain that disobedience to the Laws of God, deviation from the ways of God’s Mercies, brings down the Divine Punishment. Be not so blind as to think that punishment belongeth not unto God. God hath appointed the Measure, and by that Measure His Mercies are spread abroad abundantly for all humanity without distinction of class or race, and for all living creatures as well. But to transgress against the Measure is to walk in the ways of punishment. Praise be to God Who guideth!

Now let us take the second part of our subject, the second aspect of Islam.

Muhammad-ur-Rasul-Allah: Muhammad is the Messenger of God.

This is the practical side of Islam. By the revelation of God to Muhammad in the Glorious Quran, the way of truth is detailed, and how to walk in the way of truth is described step by step, so that those, who have ears to hear and grateful hearts, cannot fail to understand by the Grace of God, without which no one can be a believer.

And what is the way to God? The way to God is prayer. Pray not to saints, pray not to apostles, pray not to prophets, but pray to God only. The importance of this first duty of prayer is clearly understood in Islam and provided for by the appointment of times of prayer, so that at no portion of the day may the world oppress, but the memory of God may ever be refreshed in the heart.

The times of prayer each day are five: in the early morning before sunrise; a little after midday; in the later afternoon; at the time when the sun has just set, and in the early night (before midnight).

And, following prayer, Fasting is ordained upon the Faithful, who follow the way of God, the way of Islam. Jesus (may the peace of God abide with him!) fasted; and was there ever any prophet who fasted not? And was there ever any pure-hearted one, who sought God in living reality, who fasted not? Who did not assume complete control (by the Grace of God) over the powers of the body? Fasting benefiteth the body, but more the soul, clearing the vision of the soul towards the apprehension of God (Whose Name be praised!).

Now the guidance given to Muhammad the Prophet, is The Glorious Quran, the Light of the Faith, wherein is set forth the praise of the Almighty, the Merciful. The Quran is the distinction between right and wrong, a guidance to the Faithful, both in this life and the next, dealing with things seen and things unseen. If you would understand and enter into the peace of Islam, read the Quran for yourself. There are explanatory translations in English. The sum totality of mankind cannot eschew social life, and live as monks, hermits and nuns, wherefore, practical life is not to be avoided, but to be faced; clear guidance is given in the Glorious Quran, how a man may live a social life in the way most pleasing unto God.

Of things pleasing unto God, and increasing a man or woman in nearness to God, Almsgiving, or practical benevolence, is highly stressed by Islam. Give unto the near of kin, the wayfarer, the orphan, the widow, the distressed. Turn not aside him that asketh thee. Almsgiving is of two kinds,

Give alms both secretly and also openly, but that given in secret is better.

Now, finally, in this second and practical part of Islam, we must mention the institution of Pilgrimage (Al-Hajj), for, in the yearly Pilgrimage to the Holy City of Makka, there is a downright declaration of sincerity, and a definite realisation of the world brotherhood, — a brotherhood that is no dream, no unattainable ideal, but an accomplished reality. Discarding the pomp of the world and the inequalities of worldly position of riches or of poverty, the Faithful assemble, robed alike in the pilgrim’s garb of white, and perform the celebrations at the Holy Shrine, the Kaba [Kaaba]. Members of widely differing races assemble together in concord and equality in the sight of God, as one peaceful family, even addressing one another as ‘brother’ ‘sister’ ‘father’ or ‘mother’. Surely unto Him shall all peoples be returned!

And now to conclude. It is, I feel, widely imagined that Islam is an “Oriental religion” and adapted only to the Oriental mould of humanity. To this I would strongly demur.

First, I would ask, what great world religion is there that has not arisen “out of the East”? With the spread of knowledge and diffusion of friendship and understanding between the East and the West, humanity is awaking to the reality of the brotherhood of humanity in the worship of One, Ever-Living, All-Powerful, Most Merciful Lord; while the adopting of Islam and the performance of the Pilgrimage to Makka in recent years by English people of such rank and standing as Lord Headley, and, later, Lady Evelyn Cobbold, are a standing testimony that Islam is a practicable religion for English people.

Within the space of so brief an article, it is impossible to give an adequate account of Islam. We feel there may be readers desirous of information concerning questions relative to Islam, which we have not dealt with adequately, if at all. We would, therefore, refer such readers, desiring fuller information upon modern Islam in England to The Imam of the Shah Jehan Mosque, Woking, Surrey, England.