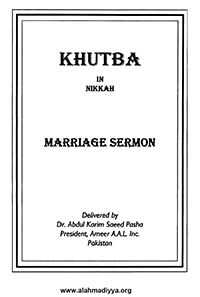 “O you, who believe, keep your duty to Allah, as it ought to be kept, and die not unless you are Muslims” (The Holy Quran, 3:102. The Family of Amran: A chapter dealing with Mary, mother of Jesus).

“O people keep your duty to your Lord, who created you from a single being and created its mate of the same kind, and spread from these two many men and women. And keep your duty to Allah, by Whom you demand one of another your rights, and to the ties of relationship. Surely Allah is ever Watcher over you” (The Holy Quran, 4:1. The Women: A chapter dealing with issues relating to women and family law).

“O you, who believe, keep your duty to Allah and speak straight words. He will put your deeds into a right state for you, and forgive you your sins. And whoever obeys Allah and His messenger, he indeed achieves a mighty success” (The Holy Quran, 33:70–71. The Allies: A chapter that has mention of the honorable wives of the Prophet).

These were the verses that the Prophet Muhammad, peace and blessings of Allah be upon him, had recited in all his sermons on occasions of marriage. It is mandatory to recite these in conducting all Muslim marriages.

The reason for the selection of these verses by the Prophet is that in there is a recipe for a successful marriage.

Marriage sermon is an opportunity for people to attend and join the happy occasion and give their blessings to the couple about to be married. It is also an opportunity to become a witness to the spiritual sanctity of the life the two people are to embark on after their marriage. Additionally, it also provides an opportunity for advising the two people in love as they embark on the journey as husband and wife. Of course, it also refreshes the advice people already married have had at the time of their marriage.

The Prophet who is reported to have said:

has thus made Nikah mandatory.

All the verses that I have recited have one thing in common and that is the exhortation to keep one’s duty to Allah. This is the primary requirement to follow the code of ethics that the religion lays upon all mankind as well as the Muslims.

In the first verse it is said that one should not die unless one is in complete submission to the will of Allah. As the time of death is known to none, it implies that one should be obeying the laws of Allah all the time and avoid all temptations that wreck marriages.

In the second verse there is a very important statement that Allah has created the man and the woman from the same soul and therefore they hold the same status and share the same rights. Then there is mention of the creation of offspring as result of union between two equal partners in marriage; thus, they are both given the responsibility of bringing their children according to the ethical codes provided by religion.

Man being mentioned in the Quran as ‘degree over the woman’ does not imply superiority but the fact that he being the maintainer has more responsibilities to the household.

Men are the protectors and maintainers of women, because God has given them more strength and because they have the primary responsibility of family maintenance.

The following of the religious code is stressed because it is the main force that binds two souls into a successful marital bond. Such a bond is necessary factor in bringing up the children for whom the parents play a worthy and honorable role model.

Another thing mentioned is the rights of the relatives that become part of the family because of marriage ties.

Islam recommends that both the relatives of the wife and the husband be given due respect and status. The marriage is thus not only a contract between two persons but also two families and beyond that two societies.

Elsewhere in the Quran is stated:

“O mankind, surely We have created you from a male and a female, and made you tribes and families that you may know each other. Surely the noblest of you with Allah is the most dutiful of you. Surely Allah is Knowing, Aware” (The Holy Quran, 49:13).

Thus, the Quran stresses that mankind being made from a single soul is not judged by gender, tribes and families which are only there to identify people; the one who is the most dutiful and obeys the laws of Allah is the noblest with Him. The respect in a married life is not to be based on the family background but is going to be judged on the character of the persons getting married.

It is stated in Al-Bukhari, the book that reports the sayings of the Prophet, that:

“A woman is selected for marriage for four reasons namely her property, status in the society, her beauty and her piety. The Prophet has placed the piety of a person as the foremost factor in making marriage as successful.”

The third verse I recited lays down truthfulness as an important factor in making marriage successful. It also stresses that the final way of making life successful is the obedience to Allah and His Messenger. All ethical guidelines in Islam have come to us through the revelation of the Holy Quran and as exemplified by the life of the Holy Prophet, peace and blessings of Allah be upon him.

Marriages are made happy by constant effort of the persons who marry one another.

Look around you and notice the lovely trees and plants and ask yourself is this there by chance and your answer will be, ‘No, it is the result of years of hard work and planning by the people who were given the job of looking after the place and making a success of it.’

Religion is a code of life and one has to practice it every minute of one’s life; avoiding every temptation that may come your way.

Marriage is teamwork in which the married couple participates but each one of the members of both the families participates; each has a useful role to play.

The start of a married life is like building a house; it has to have a strong and upright foundation, right from the start. If the foundation is tilted however high the building it will remain tilted.

The objective of marriage has to be higher than the mere physical relationship; it has to incorporate the very aim of our existence: inclusive of the working towards the happiness, the life in the Hereafter.

Signs of a good marriage are full commitment to one another, communication, patience, and tolerance; being considerate and above all faithful to one another.

Factors that wreck marriages are gossips and backbiting, which are condemned in the strongest possible words in the Holy Quran, which likens them to eating the flesh of one’s own dead brother.

“Why don’t you sharpen or get it sharpened?”

Marriage is one relationship, which needs that you analyze it regularly and make amends where you discover that the saw is going blunt. If you leave matters unattended it will lead to unhappiness in your lives. Find time for each other; find time to sharpen the saw by communication and love.

California has had some very wet weather recently. Fairuz obviously was worried in case it wrecks her open-air marriage arrangements. I reassured her and prayed that not only the weather but also her married life should be sunny and bright.

Allah has answered my prayer and there is not a cloud in sight and I am sure her marriage will be sunny and bright like today’s weather.

Monty met me for the first time yesterday and with the qualities I have found in him I already feel I have known him for years. I feel confident that marriages are made in heaven as I know he is the man who can make Fairuz a very happy person. I pray that Allah blesses this marriage with happiness and success. The track record has been good: my grandfather solemnized the marriage of Fairuz’s grandparents, her parent’s marriage was performed by my father and here I am today repeating history for Fairuz and Monty.

Fairuz and Monty, I have good news for you I have a son who perhaps someday will be invited by your children to America to do the honor!

May Allah shower His blessings and may He bless you and unite you two in goodness.