Summary
Download PDF
Summary
In this book, Khwaja Kamal-ud-Din touches upon how Religions, other than Islam, are in need of modernisation, as they have been corrupted by man over time. On the contrary, the teachings of Islam are ever-green and the basis of this is that Revelation from Allah to the Holy Prophet Muhammad (peace and blessings of Allah be upon him), to date, remains unadulterated.
Download PDF 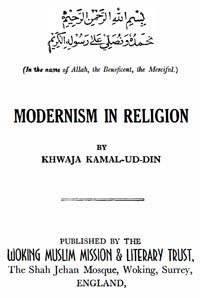 Islam does not believe in modernising things which come from God. It would be presumptuous on our part to think that modernism can mean improvement on the work of God. If things in nature owe their creation to the design of an Omniscient God, He must foresee all coming vicissitudes and provide for the coming events. We find so in the whole creation. New conditions, no doubt, do necessitate repealing of the current order, but we find no change in the material proved by nature. It comes within our use to meet the new emergency. This century may be taken as the time of inventions. Wireless, broadcast, aircraft, and submarines have come within our acquisition within recent times, but we did not invent any material for them. It was only a new mechanism or a rearrangement of things already in existence. We found a new adaptability for various things in our new machines but the said properties did already exist inherently in the materials used. Their new properties come within our ken, but they are only discovered. On the other hand, every man-made thing loses its use when events take a new turn. New order demands reshaping of manual labour. This is the distinction between natural and artificial things, the former does not allow any change, but the latter needs modernisation at each step.

This differentiating principle would also decide the claims of various Books as coming from Divine Origin. They would not, if from God, allow any modernisation of their tenets or reinterpretation of their text. New conditions in life must look for something new in theology as well. But if a Book is a Word of God, the language it has been couched in should be broad and rich enough to meet the new demand. Religions based upon human traditions have constantly felt the need of harmony with new ideas, and being tenaciously attached to our respective religions we hasten to modernism at every new cycle of ideas.

Unfortunately, teachings of Jesus lost their genuineness at their very inception. As his religion was rejected by his own tribe, his early followers looked to the gentiles for the support. In order to popularise their faith in the world of the pagans, the early fathers had to subordinate their simple religion to the demands of the people beyond the pale of the Law. Various councils and synods were called to modernise the faith on heathen lines, so much so that the old religion became absolutely metamorphosed by the end of the fifth century. The Revival of Learnings brought forth a new regime which wanted to see religion on a new basis in the West. The Reformation came and satisfied the Christian world for some time. Then began a keen struggle between the Church and Science. Though the former made every effort to throttle down the latter, it survived every persecution and came to prominence in the end. The Church then began to enter on the campaign of compromise. Modernism came to help it. Old doctrines became moulded into new shapes. But as the matter of repealing came into the hands of cultured people — the Modernist Churchmen — it was forsaken as a hopeless task. Doctor Barnes desires now a new creed [The Daily Telegraph, June 1931] “for the creeds,” according to him, “were not vitally infallible in both Religion and Science.” The learned doctor speaks a truism, but his dictum would not hold water if the religion is based on Divine revelation.

We know very little of the early changes that Hinduism went through for want of history of the Hindus. But it could not remain without modernism as it had been based on human traditions. Last century saw a new modernist in Hinduism in the person of Raja Ram Mohan Rai who was followed in his pursuit by his worthy disciple, Keshub Chandra Sen. Brahmo Samaj was started by them on theistic lines. Most of their inspirations came from the Quran. But as they could not accept the principle of revelation from without, they had to build a new Church. They made a big departure from Hinduism in its monotheistic tenets. The Raja was succeeded by another modernist in the Hindu faith — Daya Nand by name. He founded a new school of thought under the name of Arya Samaj. Though his interpretation of the Vedas — the Hindu revelation — was not generally accepted by the Hindus, he was of the opinion that there was no polytheism in the Book. But the spirit of modernity carried him beyond reasonable limits. He tried to read all newly discovered things in Science in the Vedas. Steam and electric mechanism was existing in Vedic days according to his interpretation of the Book. The Hindu community suffered a great loss in his demise as no other interpreter of the Vedas could follow his footsteps, otherwise we would have seen the mention of broadcast, the wireless and of the submarine in the ancient scriptures. Unfortunately for Hinduism, now its learned votaries have been taken up by politics, the demands of which cannot go hand in hand with ancient Hindu teachings. A spirit of exclusiveness permeates the Hindu religion. It not only divided its followers into various castes, but it would not allow millions of people, popularly called Untouchables, the ordinary rights of humanity. This spirit goes detrimentally against the spirit of unification which is the demand of the day. Hindu nationalists saw the difficulty in their way and had to avow their hopelessness in their religion. Every effort has been made on the lines of modernism to remove the ban of untouchability from millions of Indians, but all in vain.

Islam and its Book, the Quran, need no modernism. The Book is comprehensive enough to respond to all new calls. Had it not been so it could not claim to be of Divine origin. A Book coming from the All-Knowing God should provide for all that which necessitates introduction of modernism.