This booklet, published several decades ago, touches upon the differentiation between the role of a philosopher vs. a prophet in the advancement of humanity. A glorious future awaits mankind, however, this can only be brought to realisation through the final religion from God (Islam) and the Reformer of the Age (Hazrat Mirza Ghulam Ahmad of Qadian—The Promised Messiah).

Publication Information
This is ‘Publicity No. 8’. 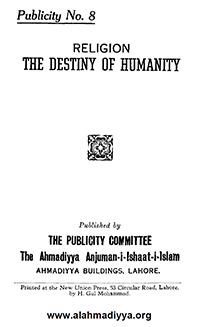 The real contest in the world today is between philosophy and religion; philosophy of course, taken in the broadest sense, including theories of life and society based on facts and figures supplied by the physical science as developed so far; similarly, by religion we mean revealed religion as distinguished from natural religion, the latter being only another kind of philosophy.

It is a very confusing moment for the Muslim youth. The future of the world will take colours from the decision he takes. A mere traditional adherence to religion, a mere lip allegiance to it, will be of no avail. If we stand for religion, we must be fully conscious of its merits, should know enough of it to be enthusiastic over it, as a Nazi is over his own cult. And let us tell you: if the Muslims cannot stand up for religion, no other people will. The following lines are an attempt to offer some leading suggestions to the Muslim youth at this moment of confusion.

Philosophers do not appear at the rising stage of a community. They make their appearance when the community or the race has settled down emotionally and intellectually. They are incapable of creating any new faith, but work on the existing volume of faith generated by the current religion. Their existence shows that the nation is in the blossoming period of its history in which laxity in thought and impulse is the order, and slackening in moral energy inevitable.

The philosopher’s appeal is to the sensuous perceptions of man, as distinguished from the spiritual perceptions flowing in the deeper regions of human mind. The great importance given to economics, political science, sex and ethnology in our times shows philosophy in its most intensified form. The physical urges in man are taken to be the basic factors of civilized existence, hence an appeal is made to the selfish side of his nature.

Prophets, on the other hand, are generators of faith, a faith that inundates all pessimism and makes man fit for his moral and cultural struggles; a faith that sees permanence in the midst of insecurities of life, and that sees life in the midst of death. To avoid any misunderstanding, faith in its full brilliance is no make-belief but a vivid perception in one’s inner consciousness of the deeper realities of existence and its ultimate destiny. It is interesting to observe that the various social units of humanity have all taken their rise in religious faith. The most extravagant atheist cannot deny that. All the various non-believers in religion look forward to an age when social units will be formed on secular foundations, but experiences of Russia and Germany in particular do not portend well for the future of such an experiment. Whereas societies founded by persons like Krishna and Moses in the misty past still endure with all their anachronisms, societies only half-based on secular principles have proved a danger not only to themselves but even to humanity in general. The difference lies in the fact that whereas the prophets base their work on faith in man, these philosophers of our time base the social structure of their respective cults on a distrust of man and his destiny. Communism, for example, cannot trust any man with private property and Nazism cannot trust any Jew in the civilised world. However strange it may sound, the enthusiasm that saturates these secular movements is at bottom a product of religion. Pure secularism cannot produce anything but cynicism, just as pure intellectualism ends only in scepticism and agnosticism. The milk of human sympathy which constitutes the only constructive force at the back of communism is a product of religious culture, a distant reflection of the minds of Moses, Jesus, and Muhammad; it cannot be justified on any materialistic ground.

Further, the appeal of the prophet is to the imperishable in man, hence to the hopeful and the sacrificing in him, and herein lies the real solution of our present social tangles.

Lastly, the religious way of understanding the reality of existence begins with man’s own self. The self of man, as it is, is not regarded as the unerring judge of things. The self has to be purified before it can be used as the right judge of the facts of existence. So long as the receptacle of knowledge, that is, the human mind, is in a crude state, all knowledge is futile. That is why the Holy Quran places this item at the top of the list of the objectives of religion.

“And He it is Who has raised among the unlettered (Arabs) an Apostle from among themselves who recites to them His communications and purifies them, and teaches them the Book and Wisdom, although they were before certainly in clear error” (The Holy Quran, 62:2).

The prevailing notion is that religion is responsible for much of the ill-will and dissension and discord in the world of humanity. The fact, however, is that the atrocities associated with religion are the result of irreligion exploiting religion. The fault of religion, if it is any fault at all, is that it tends to make man unsophisticated, sincere and trusting, qualities of mind which are the supreme assets of social humanity if left to themselves. The designing and the ambitious, however, who inwardly scoff at religion, exploit these otherwise good qualities to their own advantage. Religion is, therefore, a martyr at the hand of cunning resourceful irreligion. The misfortune of religion is that religious leaders that can hold their own against the machinations of materialism are few and far between, and that people in general pay their homage more readily to things material than to things spiritual. The tragedies of Galilee and Taif and Karbala, the doleful ends of Socrates and Mansur, are no detached incidents—they are just important landmarks in a perpetual current of martyrdom under which religion groans. And we must remember that but for this martyrdom mankind shall be missing that courage, that fortitude, that resignation, that faith in its own destiny, which alone make life beautiful and progressive in spite of its many ugly features.

A Warning to Muslims:

Muslims should beware of playing in the hands of enemies by thinking that because some religious systems have failed, religion itself has failed. On the contrary, herein is a great opportunity for Islam.

We should remember that whereas other religions have failed after being given a full trial, Islam yet awaits its chance. No serious effort has as yet been made by the Muslim world to apply its intellectual and social energies in the interpretation and demonstration of the truths embodied in the Scriptures of Islam.

We must not lose sight of the fact that neither Hinduism nor Christianity have spared any efforts to foist their own ideas of life on the civilized world, and that if their respective followers are talking of throwing religion overboard today, it is because they are despairing of their own efforts.

Not to speak of the formidable proselytising forces of Christianity, even a race-bound and confused system of religion like Hinduism has been feverishly active, of late, in propagating its philosophy and popularising some of its obsolete practices, not only in the East but even in the cultured West. Their political pre-occupations at home have not stood in the way of their sending innumerable missionaries of various types and calibre to popularise their own philosophy and culture, for whatever they are worth, among the people of the West. It is noteworthy that the soul of the political movement in Hindu India, that is, Mr. Gandhi, is looked upon as a religious figure in the West. This clearly shows the religious ambition of Hindu India in relation to the world. Certainly, in this there is a great lesson for the Muslims.

A Voice from within Islam:

While the true position of religion is thus almost forgotten, while the philosophers of the West have thus usurped the position of religious teachers and yet paradoxically enough both Christianity and Hinduism are vying with each other in showing themselves off as the best systems in the world, the former having its scientific achievements and political supremacy as additional arguments to support their claims, so much so that practically the whole of the Islamic world is almost persuaded to believe that the deliverance of the world lies in the hands of the followers of the Cross, a voice speaks out from within the house of Islam, from rather an unnoticed corner of it, saying:

“Don’t flee from Islam, this is the only path of guidance,
O ye sleeping ones, herein alone is to be found the meridian Sun.”

In other words, neither in the political and economic theories of the West, nor even in the clever intellectualism of neo-Hinduism lies the solution of problems either of India or of the world at large. The solution of all problems lies in Islam and Islam alone. Apparently so confusing, this is the proper time for the world to understand Islam.

Needless to say, the person who represented this voice of Islam was Hazrat Mirza Ghulam Ahmad of Qadian, a person very much misunderstood not only by enemies but also by many unwise friends.

As if to administer a stronger dose of optimism to the drooping soul of the Muslim world he had an ilham [revelation] from On High:

“Rejoice! Thy time is fast approaching,
When the feet of the followers of Muhammad
Will fall firmly on a higher minaret.”

In the midst of prevailing darkness, this is certainly a startling cry, pregnant with hope, reinforced by faith. It is no poetical ecstasy nor even a philosophical forecast. It has in it that spiritual vision, which has, in all critical moments of human history, supplied the basis for social reconstruction. Hazrat Mirza claims to be the Messiah, and a Messiah certainly is needed today.

The soul of humanity is lacerated, its heart is bleeding … and all this for lack of faith. Fortunately, humanity is conscious of its want. Energy is not wanting, nor intelligence. There is an overflow of energy and an overcharging of intellectualism. If anything is lacking it is faith. Give humanity that faith, it will be completely restored to health and vigour. But neither science nor philosophy can give faith. Read history and you will find that whenever faith has come to humanity it has come through religion and from no other source. Hazrat Mirza’s is the only voice of religion today in the midst of thousands of other voices and his is also the voice of Islam. Will the youth of Islam come forward to grasp his message and carry it forward to the world?

What Does Islam Mean Today?