Determination of the New Moon

This tract discusses that it is entirely permissible from an Islamic point of view to make use of modern scientific means to determine the new moon.

Publication Information
The text of this tract has been prepared from a typed 4-page document. The text was later published, with some minor changes, in the magazine of Ahmadiyya Anjuman Ishaat-e-Islam Lahore (Fiji) — Paigham-e-Haqq, Vol. 3, No. 31 and 32 (July/December 1981), pp. 5–6.
Download PDF 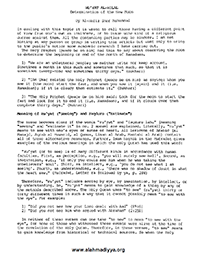 In dealing with this topic, it is wrong to call those having a different point of view from one’s own as insincere, or to issue some kind of a religious decree against them. All the contending parties may be sincere. I am not hinting at any person or group in writing this article but want only to bring to the public’s notice some academic research I have carried out.

The Holy Prophet [Muhammad] (peace be on him) had this to say about observing the moon to determine the beginning or end of the month of Ramadan:

The issue becomes clear if the words “ruyat” and “faqduru lahu” (meaning “seeing” and “estimate it” in no. 2 above) are explained. Literally, “ruyat” means to see with one’s eyes or sense or heart. All lexicons of Arabic (Al-Manajd, Aqrab Al-Muwarid, Al-Qamus, Lisan Al-Arab, Mantahi Al-Arab) contain all of these alternative meanings. Further, Imam Raghib in the Mufradat gives examples of the various meanings in which the Holy Quran has used this word:

“Ruyat (or to see) is of many different kinds in accordance with human faculties. First, as perception, e.g., ‘you will surely see hell’. Second, as imagination, e.g., ‘if only you could see him when he was taking the unbelievers’ soul’. Third, as intellect, e.g., ‘you do not see what I am seeing’. Fourth, as understanding, e.g., ‘there was no shadow of doubt in what the heart saw.” (Mufradat, Letter ra followed by ya, p. 208)

Therefore, “ruyat” includes seeing by eye, by imagination, by intellect, or by understanding. So, “ruyat” means to gain knowledge of a thing by any of the methods described above. The Holy Quran uses “to see” (ruyat) thirty or forty different times in such a way that it cannot possibly mean “to see with the eye”. For example:

In neither of these verses can one take “to see” to mean “to see with the eye”, for none of those who witnessed these events were alive at the time of the revelation of the Holy Quran. Therefore, in these verses, “to see” means to gain knowledge from historical or technical sources. So, when the Holy Prophet said,

“when you see the moon…”

it means when you determine that the moon is new, by seeing it with the eye, or by some other method, then start and end the month of fasting.

Similarly, the other phrase of the tradition, “faqduru lahu”, literally means “estimate it”. Since the early days of Islam, the elders of religion have been interpreting this phrase in two ways.

“Some people say that this tradition means to rely on stages of the moon. Therefore, if the location is such that, had there not been cloud or dust, the new moon would have been visible, then both for the beginning and end of the month of Ramadan, the order of ‘seeing with the eye’ would be applicable; otherwise not. Others contend that if it is cloudy then thirty days of Shaban (month proceeding Ramadan) should be completed.”

We are not concerned here with a discussion of the correctness or otherwise of either of these interpretations. However, it is clear from this that from the very inception there were at least some people who felt that astronomical calculations could be relied upon. In fact, both interpretations are correct because the two different traditions (no. 2 and 3 above) deal with two different situations. One relates to completion of thirty days for those places where astronomers or astronomical data are not available. The other to where such experts or data is available, so that the day and the time of the new moon can be determined by computation.

“When the new moon is hidden by clouds then the knowledge of the movement of the sun and the moon shall be referred to.”

3. Some members of the Shafii school of jurisprudence also agree with this. Al-Fiqh Ala-l-Madhahib Al-Arba (Vol. 1, p. 551) states:

“An astronomer, and anyone who has faith in such computation, can rely on a statement (of the appearance of the new moon).”

4. Imam Subki Shafii considered computation to be more reliable than the evidence of two eyewitnesses. In Rad Al-Mukhtar (Vol. 2, p. 100, published in Egypt) it is said:

“In a writing of his, Imam Subki Shafii has also inclined to relying on astronomers because computation is definite ….”

5. Qazi Abdul Jabbar and the author of Jam-ul-Ulum also adopted this position. In Volume 2 (page 100) of the above-mentioned book we also find:

“Qazi Abdul Jabbar and the author of Jam-ul-Ulum have already been quoted as saying that there is no harm in relying on astronomers.”

6. In the same place the author of Quniya is quoted as giving the viewpoint of Ibn Muqatil as follows:

“He used to consult astronomers, and when a group of them concurred he used to accept their advice.”

7. Allama Subhi Mamsani quotes Ahmad Shakir’s Awail Al-Shahur in Falsifatu-al-Tashri as saying that it is a unanimously agreed principle of jurisprudence that an effect remains only for the curation of its cause, and then it ends. He then goes on:

“And it is on the basis of this principle that some jurists declared the use of astronomical computation to be lawful in determining Muslim months, particularly the month of Ramadan. The explanation is that the tradition which commands that only ‘seeing with the eye’ of a new moon can be relied on, was related to a special reason. That was that the nation being addressed was unlettered and could not compute. Now that this nation has come out of its state of illiteracy and is literate and can compute with certainty, it now becomes incumbent that they should refer to certainty (i.e., computation) to determine the new moon, and only rely on the previous method where astronomical computation is not known.”

8. According to Muwahib Al-Din, a commentary of the Hadith collection Muatta of Imam Malik, (Vol. 2, p. 85):

“Ibn Arabi has quoted Ibn Suraij’s statement that ‘faqduru lahu’ (estimate it) is for those who have knowledge of astronomy, and ‘fakmilu al-iddah’ (‘complete the term’ of thirty days) is addressed to the ordinary people”.

There is nothing in Islam which makes the use of knowledge for religious purposes illegal. Here four examples are quoted:

Indeed, the scholars should direct themselves more to declaring the computed timetable for prayers unlawful, rather than the determination of the new moon by computation. For prayer has a higher place in Islam than fasting and it is said that after death one will be questioned about prayer first!

In this day and age, astronomical computations are as certain as two plus two makes four, and experts can compute times of all events related to heavenly bodies so that there is not a hair’s breadth of difference between the occurrence and the computation. The Lord did not create these bodies to deceive us, or so that we may ignore them. On the contrary, they were created so that we may make use of them to determine the calendar.

“Allah has ordained stages for the moon so that you may be able to compute the calendar from them” (The Holy Quran, 10:5).

These stages are predestined so that there can be no deviation and this leaves no doubt in computation. That is why the Holy Quran exhorts us to use rather than ignore them.

Time is the best dispenser of religious decrees. When the loudspeaker was invented its use was declared unlawful for sermons, but now it is used even for prayers. Paper currency was also declared unlawful, yet there is not a single Muslim country without it now. Of course, there are differences of opinion on all matters of jurisprudence; if these are going to make us unacceptable to each other then we will have to wash our hands of all of these. Indeed, as Astronomy and astronomical computation have reached a pinnacle, and the time when, as they improve in scholarship, all Muslims accept them is not far, these problems will, in fact, find their own solution automatically and the world will bow its head to the commandments of Islam. It is a sad commentary on our intellectual state that at a time when men have landed on the moon we are involved in heated debates on whether it is lawful to determine a new lunar month by computation! May Allah grant us the wisdom to understand and act upon the Holy Quran and the traditions of the Holy Prophet (peace be on him).

The question was whether “ruyat” can be applied to determine the new moon by astronomical knowledge. In the light of the Holy Quran, traditions of the Holy Prophet, and the views of the elders of religion, my conclusion is that, because knowledge of astronomy has reached such a level of certainty, there is no danger to our faith to so do.