Singing of Women and Girls at Religious Functions

This booklet, based on the religious rulings of Hazrat Mirza Ghulam Ahmad of Qadian, discusses whether it is permissible for people to sing and dance at religious functions or for women to sing in the presence of men. 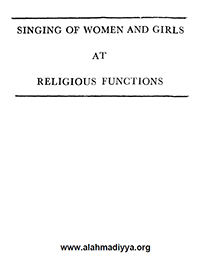 Reports have been received that at certain places abroad the practice of women and girls singing at religious functions, where men are present, has been introduced if it did not exist already. This practice seems to have been copied from the religious functions of certain non-Muslim communities who have introduced music, particularly the singing of women and girls, to attract people. Islam disapproves of this practice as it amounts to sensuality being introduced in what is essentially an occasion for self‑purification.

The verdict given by the Founder of the Ahmadiyya Movement [Hazrat Mirza Ghulam Ahmad of Qadian] on this subject is reproduced below. Another verdict on singing and dancing by men and various innovations that have been introduced in the name of religion is also given as under.

Verdict on Singing and Dancing and Innovations of the People:

“People do not pay heed to the evil consequences of their actions. They have forsaken the good deeds that they inherited from the Holy Prophet [Muhammad (pbuh)], and have instead introduced self-styled songs and canticles, and they deem it sufficient to chant these. They derive rapturous delight from the hymns of mystic poets, and that is why people flock together in large numbers to places where such singing is performed, but very few would attend a meeting where the sublime verses of the Holy Quran are expounded. This indifference towards real virtue, and indulgence in sensual enjoyment, indicates that these people are incapable of discriminating between spiritual bliss and voluptuous pleasure. It is seen that some people who attend these concerts throw away their head dress to indicate that they are transported to a state of ecstasy as soon as they come to attend the meeting of their divine. These are just innovations and new ideas that have taken root among our people. The fact of the matter is that those who have not tasted the bliss in prayer, are unaware of its flavour, and they simply cannot realise how the soul attains satisfaction and spiritual rapture through prayer. I often wonder that these Muslims, who introduce such innovations, realised that if spiritual bliss was to be found in these pursuits, the Holy Prophet, who was the most perfect of men and the biggest sage and saint that the world has ever seen, should also have given any such teaching or should have practised it himself.”

(English translation of the relevant passage in Fatwa‑e‑Ahmadiyya, p. 67)

How about the Singing of Damsels?

“It was further asked as to what was the position of the singing of damsels in the bride’s home or that of the bridegroom, at a wedding in the family. Hazrat Mirza Sahib [Hazrat Mirza Ghulam Ahmad of Qadian] said the position was about the same. If the songs are not immodest and obscene, there is no harm in singing such songs. When the Holy Prophet [Muhammad (pbuh)] had gone to Medina, the maidens sang in chorus to hail the Prophet and praise him.

A Companion of the Holy Prophet once recited some verses in the Mosque in a melodious voice, to which the Caliph Umar [rta] objected. The reciter said that he had in the same manner sung before the Holy Prophet, and he did not object to it, rather he sought Allah’s mercy for him. And a person for whom the Prophet sought Divine mercy, attained the status of a martyr. Thus, if the songs are not obscene, they are not forbidden. But men should not be present in the gathering of female singers. It should be remembered that where there is even the slightest chance of indecency and moral looseness, it should be taken as prohibited:

Live abstemiously [temperately] and strive for truth and purity,
But never exceed what the Prophet has prescribed.”