The Charge of Heresy 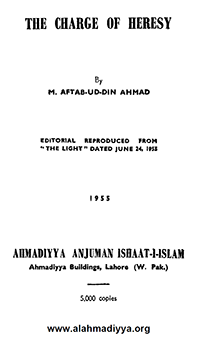 The charge of heresy has been the common lot of all reformers — people who sincerely wish to see their fellow-human beings happy and prosperous. That is to say, the reward for true and abiding service to mankind is nothing but anathema and persecution. Not to speak of others, the great founders of religion were, one and all, decried by their contemporaries as irreligious and heretic. The ordeal of Abraham [AS], the Crucifixion of Jesus [AS], the long-drawn social and physical persecutions of Muhammad [pbuh] — had all their source in the same irony of fate. This unvarying tradition is not only our consolation but a source of inspiration as well. There is a price for everything and the price of reformation and renovation of any moribund system of thought and life is the charge of heresy. In fact, the Ahmadiyya Movement could have no better credentials for its task of reformation than this charge of heresy levelled against it with all the fury of conservatism and convention-worship. For this reason, we do not mind the accusation as such.

What we do mind, however, is the appalling ignorance of facts on the part of those who are recognised as men of education and judicious thinking. We can excuse the masses for their blind hostility to our Movement but not these men of education. These at least should apply the primary rules of logic to the facts of a case before forming any opinion about it.

Now, the principal charge against the Ahmadiyya Movement is that it has installed a new prophet after the Holy Prophet Muhammad [pbuh]. Before going into any other enquiry on the subject, a man disturbed by this news should first go to the nearest Ahmadiyya mosque, and listen to the Adhan [Azan — Call to prayer], to see who is announced there as the Prophet — whether it is the name of Muhammad [pbuh] so announced or that of Mirza Ghulam Ahmad supposed to have replaced the Prophet. He should next observe the Ahmadiyya people in prayer to see if their Qibla [direction whilst praying] or their manner of praying in any way differs from that of other Muslims. After this, he should see what book these people recite from in their prayers as well as on other occasions of devout scriptural recitation, to find out if it is any book other than the Quran. If the enquirer is satisfied that the Prophet announced from the Ahmadiyya mosques is Prophet Muhammad [pbuh] and that the Qibla and the prayers of the Ahmadis are the same as those of other Muslims and the scriptural recital in prayer and other occasions is from no other book than the Quran, he should be in no doubt as to the religious identity of this much-maligned sect and as to the personality around which their highest religious emotions revolve.

But we should suggest a further test to resolve all doubts on this score. The world knows that Islam consists of the Quran and the Sunnah. The Sunnah, it is a well-known fact again, is the practice of the Prophet [Muhammad (pbuh)]. A man in doubt about the Ahmadiyya Movement should apply this test as well to come to a definite decision about the religious faith of its members. He should find out what is regarded as Sunnah by the people of this sect — whether it is the practice of the Holy Prophet Muhammad [pbuh] or that of Mirza Ghulam Ahmad, the Promised Messiah. This is, indeed, the most crucial test. If the acts of Muhammad [pbuh], peace and blessings of Allah be upon him, continue to form the basis of the rules of Ahmadiyya religious life, it will be simply absurd to suspect these people of having installed another prophet in the place of the Holy Prophet Muhammad [pbuh]. These are obviously very simple tests within the reach of every person and they are basic as well as conclusive.

It has been said that in the discernment of fundamental facts of life, an unsophisticated and uneducated layman at times exhibits a greater sense of true logic than the so-called learned. The aphorism is true. We have personal knowledge of the fact that the allegation of a new prophethood against the Ahmadiyya Movement has led the average unsophisticated Muslim to think that the people of this Movement regard Prophet Muhammad [pbuh] as a back number and the Quran as an abrogated scripture and that their prayer and their Qibla are altogether different from those of other Muslims. We have seen Muslims, men and women, without any close contact with us before, exclaiming, after they have seen us in prayer,

Some of these have actually snatched the Quran from our hands to see if it is a different book from what they know to be the Quran and have felt disappointed that it is every whit the book which they use as their scripture and the one that is devoutly recited in every Muslim home. Now, these implications in the general Muslim mind of the charge of a new prophethood in the Ahmadiyya Movement are quite natural and follow logically as a matter of course. An educated man, with greater claim to logical thinking, will discard these tests only at the peril of his logic in ascertaining the position of our movement in relation to the faith of Islam.

A Maulvi [Muslim cleric] may be excused if he cannot decide what constitutes adherence to the faith of Islam and what amounts to a denial of it from the legal point of view. But for those who have spent years in schools and colleges to train their minds for scientific thinking, this should not be a difficult task at all. Spiritual, ritualistic or metaphysical questions may present some difficulty to those who are not acquainted with their terms and trappings. But the definition of a socio-religious community should present no such difficulty. Even the Hindu intelligentsia succeeded in defining their highly elusive cult of Hinduism. And it is because of this ingenious definition that the agnostic Jawahar Lal Nehru is regarded by the whole Hindu race from Nainital [North India] to Cape Comorin [South India] as much a Hindu as Madan Mohan Malaviya, a staunch believer in caste system and untouchability. Today the whole outside world recognises this definition of a Hindu.

It will indeed be a bankruptcy of Muslim intellectual thinking not to be able to find out a simple definition of Islam understandable to everyone inside and outside the fold, independently of the quibbles of the Maulvis, whose fatwas, taken together, will reduce the number of Muslims in the world to nil. As a matter of fact, all existing Muslims should have to forfeit their heads, according to these fatwas, because, in the view of those who issue them, an apostate cannot be allowed to live in the world, although a born unbeliever may be permitted to do so under certain conditions. As it happens, not a sect will be found against which an anathema of heresy has not been issued by some other sect. So, it will be a dangerous path to follow to proceed on the basis of these fatwas. We have to evolve an independent and scientific method of ascertaining what constitutes membership of the faith of Islam. And we dare say, such a definition will be endorsed by the explicit words of the Quran and the Prophet. The Quran says:

“Whoever says our prayers and faces our Qibla (in prayer) and eats meat slaughtered by us — is a Muslim and for him is the protection of Allah and the protection of the Prophet” [Sahih Bukhari, Book 8, Hadith 43].

Unlike Roman Catholicism, heresy hunting is no duty of a believer in Islam. If a person says that he is a Muslim, he must be accepted as such. Experience has brought the wisdom to all religious communities that for social purposes, the religious identity of a person can be known only by what he professes. It is high time that Muslims who initiated this great principle should reap its benefits themselves and save the unique brotherhood of Islam from disintegration and disruption through a foolish insistence on excluding from it those who are anxious to remain in its fold and who, moreover, act in a way that proves beyond the shadow of a doubt that their religion is fundamentally the same as is known by the name Islam in the world, and as will be recognised as such by anyone who takes a legal view of the beliefs and institutions of this faith.

Far from Ahmadis making their allegiance to Islam doubtful to a legal mind, the rigid among them will be found to insist that the bulk of the Muslims of today are not Muslim enough and that they themselves are the only perfect Muslims. To doubt such people’s loyalty to Islam is really preposterous.

We recall a very interesting incident in this connection. A Lahore Ahmadiyya leader had gone to Aligarh, where the students of the University asked him about the charge of heresy against his community.1 The reply of this leader was very significant:

“Well,” he said, “if anyone is in doubt about our loyalty to Islam, let him come forward and make us Muslims in the way he would bring any unbeliever to the fold of Islam.”

No one came forward Well, the fact is that Islam in practice has left nothing undefined. Even the manner of entering its fold has been prescribed and that manner is by itself eloquent enough to distinguish a Muslim from a non-Muslim. We make the new entrant to declare his faith in a certain formula and it is this formula which constitutes the essence of Islam, its most distinguishing feature. And so long as a person does not repudiate this formula, no charge of heresy can legally sustain against him whatever his differences with other Muslims.