The Forbidden Food (The Flesh of Swine)

This booklet originally appeared as a posthumous article with some minor differences in The Islamic Review (February 1935), Vol. 23, No. 2, pp. 42–45. 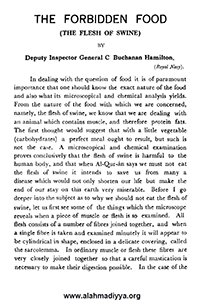 In dealing with the question of food it is of paramount importance that one should know the exact nature of the food and also what its microscopical and chemical analysis yields. From the nature of the food with which we are concerned, namely, the flesh of swine, we know that we are dealing with an animal which contains muscle, and therefore proteins and fats. The first thought would suggest that with a little vegetable (carbohydrates) a perfect meal ought to result, but such is not the case.

A microscopical and chemical examination proves conclusively that the flesh of swine is harmful to the human body, and that when Al-Quran [The Holy Quran] says we must not eat the flesh of swine it intends to save us from many a disease which would not only shorten our life but make the end of our stay on this earth very miserable. Before I go deeper into the subject as to why we should not eat the flesh of swine, let us first see some of the things which the microscope reveals when a piece of muscle or flesh is so examined. All flesh consists of a number of fibres joined together, and when a single fibre is taken and examined minutely it will appear to be cylindrical in shape, enclosed in a delicate covering, called the sarcolemma. In ordinary muscle or flesh these fibres are very closely joined together so that a careful mastication is necessary to make their digestion possible. In the case of the flesh of swine, these fibres are so closely connected that it is very rarely that proper separation is made. Thus, when the food is not broken up into smaller particles the various digestive juices are unable to penetrate to the centre, and so a great deal of bodily harm is done. Now the chief function of the sarcolemma is to keep the flesh firm, but it is not unusual for parasites to be seen living in them, and it is all the more peculiar to the flesh of swine. To render this state of affairs less hurtful, it is necessary to cook the food well, and this cooking is found to act quite well in all flesh except that of swine, in which, owing to the extraordinary close union of the fibres, it is difficult for the heat to reach the various parasites which may be inside the sarcolemma, except by prolong­ed cooking, which again destroys most of the useful elements of the flesh. But even when cooking is done other difficulties are encountered.

Swine as a food may be divided into three parts, namely, pork, ham and bacon. Pork, being the flesh of a young swine, has not so much nourishment as the flesh of the older animal. Again, if we make a chemical analysis of the young animal, we will find that it contains more gelatine and less fibrin than the older swine, and is, on this account, less easily digested.

Let us, now, direct our attention to the difficulties which arise through cooking. The stomach has certain peculiarities with regard to flavours which need consideration in the study as to why Al-Quran should warn us against the eating of the flesh of swine. In certain cases where pork is digested it is known that people do not enjoy the very best of health and the stomach appears out of order. This is due to cooking, because in trying to reach the interior of the meat the outside is overdone or burnt, and the fat which is found in such an abundance gives rise to certain acrid compounds consisting of acrolein and fatty acid, and it is these which disagree with the system and upset the stomach. I have already mentioned that in order to digest the flesh properly it must be masticated thoroughly; but it will be readily granted that even with the best of teeth and greatest care, portions of solid food not masticated well, that is, made only into a pulp, are actually swallowed; and when we consider how often teeth are defective, and how carelessly people eat whilst talk­ing, we have to acknowledge that as a matter of fact ill- masticated food is swallowed invariably at every meal. If pork, therefore, is swallowed in this manner, we can easily understand how difficult it is for the digestive juices to penetrate the substance when all the fibres are set so closely together. It has also to be remembered that the essential point to secure in eating is that the digestive juice of the stomach shall penetrate every particle of food, and this within a certain time limited to a few hours at the most. If the food is not properly masticated it will be impossible for the centre to be reached by the juice before the stomach has expended its digestive force, and thus a number of undigested particles will be left either to encumber the stomach when it ought to be clean and ready to prepare for the next meal, or, if they passed out of the stomach into the small intestines, either to call upon the second process of digestion to attempt to do what ought to have been completed during the first process, or to irritate the intestines by throwing into them an abnormal quantity of waste.

As has already been mentioned, pork is especially liable to parasites. This condition is made possible from the manner and conditions under which pigs are reared, and the part of the swine which is the first to be infected with these parasites is the outside; and by a strange fate the deep part of the lean is not generally liked, the brown outside being the favourite part, although the most dangerous, owing to the parasites with which it is infected. It must not be inferred from this that all swine contain parasites, for in the sucking pig the chance of the animal to become so infected is reduced to the minimum; but, as we have already seen, these are less nourishing than the older animal. Besides, owing to the large amount of gelatine which they contain, digestion is not so complete a success in their case as one could wish for.

My chief aim in writing this article is not so much to give information to those who do not know why swine is forbidden to Muslims, as to eradicate the erroneous idea which prevails among so many learned men, Christian and others, namely, that in Arabia, during the time of our Holy Prophet Muhammad, there was a good market for swine and that Muhammad, ‘who was a shrewd business man, ordered his people to sell their swine and make a fortune thereby.’ It is also believed that the Holy Messenger found his people dying in the hot weather ‘because of their eating swine, and hence the prohibition.’

Now all these stories are false and have no foundation whatsoever. No law laid down in our Book [The Holy Quran], the Book of the Muslims, can be localized to any particular country. Al-Islam is universal, and as such its laws must be obeyed wherever one may be whether the place is hot or cold.

Now, therefore, when you see how your Lord has pointed out to you a harmful practice, which you were ignorant of, I would ask you especially to keep in your mind that great verse and act upon it:

“Oh! Worship your Lord, Who hath created you and those who were before you.”