The Holy Prophet on International Peace and Justice

This booklet discusses the peaceful message of Islam, as preached by the Holy Prophet Muhammad (pbuh), is the only guaranteed path to global peace and justice. 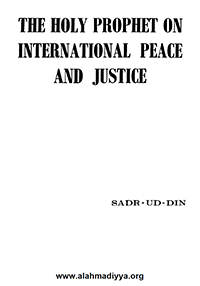 Publisher’s Note: On the 28th of September, 1969, Hazrat Maulana Sadr-ud-Din, Head of the Ahmadiyya Community, Lahore, delivered an inspiring lecture on “The Holy Prophet’s Teachings on International Religion and International Justice” in the InterContinental Hotel, Karachi. A big assembly of intellectual elite, comprising men and women, listened to it with rapt attention. After the enlightening lecture the audience expressed their profound satisfaction and deep gratitude.

“He has prescribed for you the religion which He enjoined on Noah, and which We have revealed to thee, and which We enjoined on Abraham and Moses and Jesus, saying, remain steadfast in obedience and be not divided therein” (The Holy Quran, 42:13).

The high and noble aim of preaching such a universal religion is to unite the nations of the world, establish peace, and eradicate all causes of conflict. Today the world is out of joint. Mankind is facing a fiery ordeal. Man’s inhumanity to man makes the heart sick. People all over the world are pining for peace and amity. The light of scientific knowledge is spreading. But it has signally failed to dispel clouds of hatred and hostility which have spread darkness. Every now and then, plans for world peace are put forward. But they prove all too superficial. Hence, they fizzle out.

Real and lasting peace springs from a belief that all leaders, and Prophets of all nations must be respected. We should respect their teachings. It should be our firm faith that by following their teachings, saintly people were born. This faith illumines the hearts and charms away the gloom of prejudice. Unless minds are purged of this gloom, there can be no international peace. The most effective panacea for world peace was proclaimed by the Holy Prophet [Muhammad] (peace and blessings of God be upon him). He forcefully exhorted the people that they should cherish reverence for the Prophets of all nations, and live up to their revealed teachings. This panacea was tried with unparalleled success in Arabia, where the warring tribes were cemented into brotherhood. This panacea can be tried even today. It will surely lay the foundations of real and enduring union and peace.

The laws that operate in the Universe are cosmic in their nature. The sun and the moon shed their light on all nations. Rains also do not discriminate. They produce crops and fruits for all people all over the world. Likewise, air is beneficial for all men and animals. Thus, all that is indispensable for life, is dispensed to all. This phenomenon points to the fact that the whole universe is governed by One Supreme Lord. His Oneness aims at creating unity among His creatures. The Holy Quran says:

If an adequate provision exists in the form of air, water and light for the maintenance and continuance of physical existence, there is a corresponding dispensation for our spiritual life. This is in the form of the Books revealed to the Prophets of all the nations. As there is one fountainhead of all revelations, the principle of revelation is also the same. To this effect, God says:

“And We sent no Messenger before thee but We revealed to him saying ‘There is no God but I; so worship Me alone’” (The Holy Quran, 21:25).

“Mercy for all people.”

Just as one universal religion is an effective means of uniting the nations, it is also a guarantee for establishing international peace and justice.

With a view to attaining this noble object, the Holy Prophet [Muhammad] (peace and blessings of God be upon him) was commanded thus:

“Let not the enmity of a people incite you to act otherwise than with justice. Be always just, that is nearer to righteousness. And fear Allah. Surely, Allah is aware of what you do” (The Holy Quran, 5:9).

All his life the Holy Prophet [Muhammad] (peace and blessings of God be upon him) carried out this command in the letter and the spirit. There are historical events which support this statement. For instance, in Madina a stolen armour was recovered from a Jew’s home. When he was proceeded against, he deposed that Taumah Ansari stole the armour and had planted it in his house. Thus, Taumah was the culprit and should be punished. When Taumah Ansari was hauled up for this, all the Ansars waited upon the Holy Prophet [Muhammad] (peace and blessings of God be upon him) and interceded on his behalf. They said he was innocent. He should be let off, otherwise it would bring disgrace to their community. They also pressed for consideration that it was a case of Taumah Ansari versus a Jew who is an enemy of Islam. When the matter was investigated by the Holy Prophet [Muhammad] (peace and blessings of God be upon him) Taumah was found guilty and was punished. The Jew was acquitted. The Holy Prophet [Muhammad] (peace be upon him) followed the divine injunction لَا یَجۡرِمَنَّکُمۡ شَنَاٰنُ قَوۡمٍ (the enmity of a people should not incite you) and declared innocent a member of the enemy community, and set a noble example of justice and fair play. Unless this principle is adhered to, there can be no international peace. Incidentally, I recall an instructive anecdote. I once had an occasion to meet Mr. Justice Sir Trevor Harris, the Chief Justice of the Punjab High Court before the Partition [of India]. I told him that the English people were known for strict adherence to the canons of justice and fair play. But when there was a case between an Englishman and an Indian, the English Judge was invariably guilty of giving a wrong judgement in favour of an Englishman. This took the Chief Justice’s breath away. Hush fell upon him. At this juncture I recited the Quranic verse quoted above. He was astonished to hear the story of Taumah. Thus, the Holy Prophet [Muhammad] (peace be upon him) stands out as the Magnificent Exemplar for the rulers of the world.

There is another glowing instance of justice and fair play. The Holy Prophet [Muhammad] (peace and blessings of God be upon him) gave the following glad tidings to the Muslims:

“O my people! You are about to conquer Egypt. Keep the welfare of the conquered people in view. You shall have to abide by the divine covenant that their life and property and their honour should be protected.”

He also said that the Egyptians were the relatives of the Muslims. This was an allusion to the fact that their great-grandmother Hajirah (Hagar) hailed from Egypt.

When Egypt was conquered, Amr bin al-As the victor, was appointed Governor. During his tenure, his son beat a Christian Copt. When the news reached Hazrat Umar [rta], he summoned both the father and the son to appear before him in Madina. He paid no heed to the status of his Muslim Governor, because he did not attach any importance to a false sense of prestige. Consequently, the Governor had to reach Madina to account for his son’s misdemeanour. He was rebuked by Hazrat Umar [rta] thus:

“Since when have you begun to enslave the people who were born free.”

Thus, the father and the son had to stand in the dock for an injury done to a Christian.

There is still another event worth remembering. During the Holy Prophet’s lifetime, the Muslims conquered Yemen, which was inhabited by the Jews. The Holy Prophet [Muhammad] (peace and blessings of God be upon him) appointed such distinguished persons as Muaz bin Jabal and Abu Ubaidah to administer the affairs of this territory. When they started on their journey to Yemen, the Holy Prophet [Muhammad] (peace be upon him) walked on foot with them and exhorted them how to rule over the non-Muslims. He told them that they were going there as rulers of the People of the Book. It, therefore, was their duty to remember:

“These people have a revealed religion. They are wise. Rule over them leniently. Do not be hard on them.”

“Your administration should have a benevolent complexion which should please them. On no account should it alienate their minds. The ruler’s job is not to rob the subjects and swallow their possessions”.

“Do not deal with the non-Muslims cruelly, because the victim’s cry of anguish, caused by the ruler, will go straight to the heavens, as there is no barrier between it and God”.

These are the Holy Prophet’s guidelines for establishing peace and justice among the nations. Their efficacy has been vindicated. If any teachings can put an end to conflicts and strengthen the bonds of human brotherhood in these times of crisis, it is the Holy Prophet’s (pbuh) teachings.

The Holy Prophet Muhammad (peace and blessings of God be upon him) is the Prophet for our times and will remain the Prophet for all times to come till the Day of Resurrection. It is this teaching which is embalmed in the Kalima [A Muslim’s pronouncement of faith]:

“There is no god but Allah and Muhammad is the Apostle of Allah.”

None, but Allah alone, is worthy of worship, and guidance of no prophet other than Muhammad should be accepted.