When Intellectual Darkness faced Europe — The Torchbearers of Islamic Culture

Summary
Publication Information
Download PDF
Summary
This book responds to the allegation that science, culture and civilization flourished through Christianity and that Muslims are backward in their achievements.
Publication Information
This article originally appeared in the Moslem Outlook, Cape Town, South Africa, May 1 and 8, 1926. It was re-printed by the ‘Woking Muslim Mission’ the same year as ‘Appendix 2’ in the book, ‘Open Letters to the Bishops of Salisbury and London’ by Khwaja Kamal-ud-Din.
Download PDF 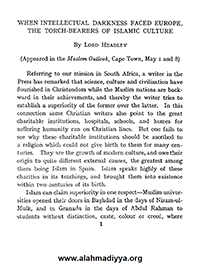 Referring to our mission in South Africa, a writer in the Press has remarked that science, culture and civilization have flourished in Christendom while the Muslim nations are backward in their achievements, and thereby the writer tries to establish a superiority of the former over the latter. In this connection some Christian writers also point to the great charitable institutions, hospitals, schools, and homes for suffering humanity run on Christian lines. But one fails to see why these charitable institutions should be ascribed to a religion which could not give birth to them for many centuries. They are the growth of modern culture, and owe their origin to quite different external causes, the greatest among them being Islam in Spain. Islam speaks highly of these charities in its teachings and brought them into existence within two centuries of its birth.

Islam can claim superiority in one respect — Muslim universities opened their doors in Baghdad in the days of Nizam-ul-Mulk, and in Granada in the days of Abdul Rahman to students without distinction, caste, colour or creed, where they were looked after, boarded and lodged at the public expense.

Besides hospitals, libraries, and other institutions there were public baths in every town in Moorish Spain, which were demolished in the time of Ferdinand, because cleanliness was strange to Christian piety in those days.

The short mission of Jesus did not leave him time enough to evolve a system which could further science, culture and civilization; on the other hand, the Quran and Muhammad emphasized things that caused a great upheaval of science and culture unknown before.

The early Muslim listened to the recitation of the Quran and was moved by it to learn to read and write in order to know it himself. The study of the Quran led to the foundation of an elaborate and scientific Arabian grammar and rhetoric, to philology and other branches of language; to research in ancient history and the record of passing events, and to the writing of erudite treatises on law. It also resulted in a strong desire being created to learn all that could be known about Nature and its laws.

Muslim messengers were sent to ransack India, Persia and Greece for hidden treasures of knowledge. Fabulous sums were paid for works which had been concealed for ages from the world. All this wisdom was translated into Arabic and compared with the natural facts observed, then revised and at last brought a system from out of chaos.

These unprecedented worldwide efforts need not surprise us. Muhammad created an insatiable thirst for knowledge, such as:

“A Muslim should traverse mount and valley even unto China to acquire knowledge; the difficulties met with, however arduous, are one great way of worshipping God.”

“Preserve knowledge to posterity by writing it.”

“It is the business of every Muslim to discover wisdom from whatever source.”

“It is obligatory on every Muslim, male or female, to acquire knowledge.”

“A Muslim should study from the cradle to the grave.”

A Muslim should learn from the wise of any religion. Such sayings were the seed which the Quran brought to fruition.

Several thousand books on history were written differing in magnitude from one volume to eighty. They dealt with nations and empires, with persons and towns. The Muslims were the first to teach the world the art of making encyclopaedias and dictionaries, linguistic and biographical.

For geography, they sailed the oceans and traversed the land. They described the phenomena of both sea and land and everything else they saw. Races and men, kings and Governments, religions and creeds, habits and customs, animals and insects, mountains and valleys, rivers and canals, forests and plains, fertility and aridity; fields and orchards, crops and productions, roads and routes, villages and towns — all portrayed, more or less in detail, from Japan to England. The Arabic language can boast of many immortal works of geography. The spherical shape of the globe was held to when its flatness was asserted by the scientists of priest-ridden Europe. The earth’s circumference was calculated and proved to be 24,000 miles. Other geographical facts were revealed, while discoveries were made in the East and the West.

These sciences were unknown until the Muslims brought them to light. Political economy was known as “Management of Capital” and “Civil Politics”. Sociology was called the “Science of Society”.

Doctors as well as chemists had to pass an examination in order to obtain a licence to practise their profession. In Baghdad there were eight hundred doctors of different classes. Each class made one branch of medicine a special study. There were surgeons, opticians, dentists, specialists in the diseases of women, and so on.

The Muslim doctors through practice and experiment, arrived at advanced ideas which gave ancient medicine its deathblow. They upheld that many diseases caused by unsatisfactory diet could be eradicated by the use of cooling vegetables, herbs and plants. They were the first to use anaesthetics and describe diseases heretofore misunderstood and to prescribe their cure.

Modern pharmacy is an institution of their invention. They studied the effect on the body of drugs from many parts of the earth and discovered many new remedies.

It has been stated that modern chemistry was founded by the Muslims. Nitric acid, sulphuric acid, silver nitrate and many other compounds were first discovered by Muslim chemists. A Muslim historian said that when wood was painted with a certain compound made by those chemists it became fireproof. They were the first to teach the world distillation, filtration, crystallization, solutions, etc. They showed in treatises the worthlessness of ancient chemistry.

Botanical students, accompanied by artists, travelled far and wide to study the different vegetations and described them minutely by pen and brush; ultimately these researches were recorded in scientific botanical treatises.

Hospitals were founded in large towns from the Indus to the north of Spain. These hospitals were well-arranged, and all classes of people were admitted to them. There were separate wards for each disease. The head doctor, accompanied by assistants, made daily visits to his wards to examine his patients and describe their treatment. Here also were departments for the study of medicine and pharmacy.

Wonderful discoveries concerning the movement of the solar system and other astral bodies were made. The size of the earth, the variation in the lunar longitudes, the precession of the equinoxes were ascertained. The astronomical tables of Albani were translated into Latin and were the base of astronomical study in Europe for centuries.

As they had done with ancient chemistry, the Muslims were the first to show the falsehood of astrology, and set out in treatises, based on observation and experience, the facts and usefulness of astronomy. For this purpose, many observatories were established all over the wide empire. Many instruments were invented, such as the telescope and others.

The Arabic figures as well as alphabet are too well known to need any comment. Geometry and other mathematical branches were zealously studied and improved.

The fine arts were not neglected. Music was made a science and universally practised. Animal sculpture and painting were developed to a high degree of excellence, while Arabic architecture is world famous.

No town, however small, was without colleges or schools, while the principal cities of the empire had their separate universities.

High and low, rich and poor, were all absorbed in one intellectual pursuit or another. One writer left four hundred works, another six hundred, others many hundreds, and so on.

Islam, annulled fortune-telling, magic and many other obsessions which were predominant at the time of Muhammad. Reason and natural laws replaced them in ruling life. Islam eradicated the idea of a person being entitled to recognition, respect or superiority merely because he was high-born. The individual was to be estimated by how he conducted himself, by his knowledge and usefulness.

The status of woman was raised; the laws of marriage were reformed, and in fact the present civilization owes its growth to the influence of Islam. For fully ten centuries Islam made headway in power, civilization and science. Then Muslims became intoxicated with their success and wealth. Luxury caused enervation, foreign economic pressure reduced them to their present condition, and a sort of blight overtook them. If the present-day Islam is lacking in culture and science, it is on account of their failure to maintain their religious standard. The case is different in Christendom. The Western nations made their present progress when they liberated themselves from the hold of Church religion and began to think independently for themselves on Islamic lines.