In this booklet, written in December 1918, Maulana Muhammad Ali (1st Head of the Ahmadiyya Anjuman Ishaat-e-Islam Lahore) challenges the Qadiani Khalifa, Mirza Mahmud Ahmad, to a debate on the differences between both Jamaats, at the Jalsa Salana events of the respective branches of the Ahmadiyya Movement. There would thus be a debate at Lahore followed by one at Qadian. The Qadiani Khalifa responds by accusing Maulana Muhammad Ali of being crafty, to which the Maulana responds with an alteration of the rules of engagement of the debate to appease the Khalifa. 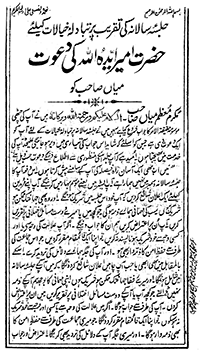