This book responds to accusations against Hazrat Mirza Ghulam Ahmad of Qadian. The following allegations are answered: 1. He created a rift in the Muslim Ummah?; 2. He was a British agent?; 3. He praised the British Government and gave assurance of his loyalty; 4. He banned Jihad. It ends with some examples of his service to Islam. 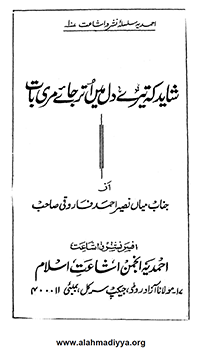