Graces, Excellencies and Surpassing Merits of the Holy Quran

This book contains extracts from the writings of Hazrat Mirza Ghulam Ahmad of Qadian that impress on the reader’s mind the unique merits of the Holy Quran as a Holy Scripture. 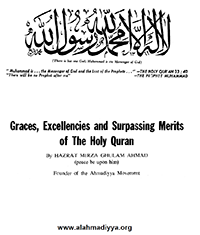 The Holy Quran establishes in a pragmatic manner the truth of the basic principles of Islam which form a basis for one’s salvation. Its teachings are grounded in a convincingly philosophical reasoning. It proves to the point of conviction every argument advanced by it. For instance, it proves the existence of the Creator of the Universe. It establishes the truth of the Unity of God. It also marshals decisive arguments to vindicate the supreme need of the Divine Revelation. It is never at a loss to distinguish truth from untruth. This by itself is an incontrovertible proof that Furqan Majeed [The Holy Quran] is the Revealed Word of God. This point also establishes its Divine reality and its supremacy. No revealed book before the Holy Quran nor any thinker or philosopher who exercised his talents in search of truth, had ever been able to highlight false beliefs by luminous reasoning nor had they ever been able to banish doubts and apprehensions from the human mind by radiant arguments. This glorious task has been accomplished in a unique manner by the Holy Quran. The Holy Prophet [Muhammad] (peace and blessings of Allah be upon him) never attended any school even for half a day. He never learnt any knowledge, logical or practical, from any philosopher or logician nor did he come into contact with any sage or scholar. Still, he based the divine philosophy on rational arguments and expounded such beliefs as guaranteed lasting salvation, in such an illuminating manner as has no precedent anywhere in the whole history of mankind. This is an accomplishment of such a high order as is not possible or even thinkable without divine help. Here human reasoning has perforce to bow before the Holy Quran which was revealed by Allah Who has no rival. Hence human knowledge can never be equal to divine knowledge (Extract from: Barahin-e-Ahmadiyya, Vol. 1).

Why is the Holy Quran Superior to other Scriptures?

Undoubtedly, all scriptures as revelations are equal. But from the point of the comprehensiveness of the narration and the excellences of the beliefs enshrined in them, some are superior to others. From this angle of vision the Holy Quran is superior to all scriptures, because it explains vigorously and convincingly the principles of true religion, expounds the principle of the Unity of God, unfolds the panorama of the forbidden things, and the range of the varieties of idolatry (shirk), prescribes sovereign remedies for spiritual ailments, divulges the falsity of the false creeds and establishes the truth of the true faith in a manner which is conspicuous by its absence in other scriptures (Extract from: Barahin-e-Ahmadiyya, Vol. 2).

The Holy Quran Leaves no Room for any Revealed Book:

The Holy Quran was revealed at a time when mankind faced all such exigencies as it was destined to face. There was moral degradation all round. There was an anarchy of creeds. There was spiritual deterioration which vitiated every sphere of human life. Chaos and confusion of every hue and colour had reached the nadir. At this critical juncture, the teachings of the Holy Quran were revealed. Thus, it marked the crown and completion of Divine Law for the guidance of mankind. The previous Laws were incomplete because when they were revealed, the disorder and mischief had not reached its climax. Hence the scriptures were just enough to meet the needs of the times. Thus the marked difference between the past scriptures and the Holy Quran is that the former, even if they had remained immune, would have proved sadly inadequate. This emphasised the need that a complete and immutable scripture like the Holy Quran, should come. Thus, the Holy Quran leaves no room for any book to supplement its teachings. The possibility of any type of scripture is completely ruled out because there is no further point after the highest degree of excellence and completion attained in the Holy Quran. Its replacement is thinkable only when one wishfully presumes that the principle of the Unity of God like the Gospels and the Vedas will give way to idolatry and the crores [millions] of the True Believers will become idolatrous and animists. But all this is a sheer fictitious presumption as the events falsely envisaged shall never come to pass (Extract from: Barahin-e-Ahmadiyya, Vol. 2).

The Holy Quran and the Bible:

The onus of showing a book which was extant in the Holy Prophet’s time and it was made use of, lies on our opponents. If there had been in the Holy Quran the slightest trace of borrowing from the Bible, the Christians of those days would have raised hue and cry and would have said that it was recorded after it had been heard from them. It must be borne in mind that it is the Holy Quran alone, which has claimed to be a miracle. Its contents whether they are stories or anecdotes are from the Unseen. It also contains prophecies about the future extending till the Day of Resurrection. Even from the point of rhetoric and eloquence, it is a miracle. Thus, it was quite easy in the Holy Prophet’s time for the Christians to single out what they could present as taken from their books and could call it plagiarism. It could then bring Islam to naught. But now it is too late to fabricate charges of plagiarism. It is simply unthinkable that the Christians held their peace out of courtesy although they had such books which could be trotted out as the original source of the stories narrated in the Holy Quran, no matter their books were real or false. Thus, without doubt the entire theme of the Holy Quran is Wahy—Divine Revelation—and this Revelation is so superhumanly magnificent that no man can bring forth the like of it. It is matter for serious consideration that a person who has plagiarized his theme from other books and knows that it is from God, can never venture to come out into the open and challenge others to compete with him. It is stranger still that no one should come out to meet his challenge and should feel at a loss to expose him. The fact of the matter is that the Christians are naturally indignant at the challenge of the Holy Quran and the reason for their indignation is that the Holy Quran has dealt a crushing blow at the Christian creed (Extract from: Chashma-e-Masihi, p. 14).

Those who Exalt the Holy Quran shall be Exalted:

The Holy Quran is Khatam al-Kutub [Last of the Scriptures]: